Jeff Flake Has Voted With Trump 91.7 Percent Of The Time 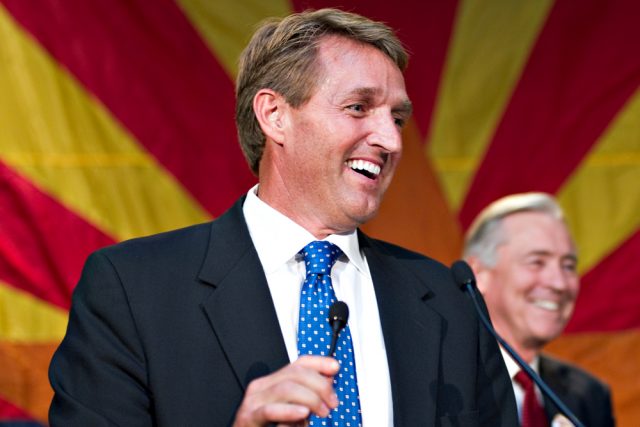 Senator Jeff Flake (R-AZ) announced his retirement from the Senate after the end of his current term in 2018 earlier today.

Later expounding on his motivation for the abrupt departure, the one-term Senator took to the floor and issued a series of thinly-veiled jabs at President Donald Trump. He also called out his fellow Republicans for their continued silence on the “mercurial” president’s behavior.

While gripping the lectern with both hands, Flake’s quavering voice uttered the following sentence during his blistering speech: “It’s time for our complicity and accommodation to the unacceptable to end.

Bons mots for at least nine senators who stood in standing ovation as the tirade drew to a close. As of now, Senator Flake has joined the Hashtag Resistance. And though Flake’s anti-Trump spectacle was light on policy, that shouldn’t be particularly surprising.

Jeff Flake has voted in favor of President Trump’s position 91.7 percent of the time, according to political analysis blog 538.

That’s probably not the perfect score MAGA devotees would like to see, but nobody has a perfect score in either the Senate or House.

All told, Senator Flake has only disagreed with Trump when it matters on four (4) distinct occasions. They are:

1. Basic Appropriations A May 4 vote was called on the 2017 fiscal year appropriations bill. Trump wanted that vote to fail. Flake voted for it.

2. Hawkish Sanctions Part I A June 14 vote called for imposing sanctions on Russia. Trump wanted that vote to fail. Flake voted for it.

3. Hawkish Sanctions Part II A July 27 vote on imposing sanctions on Russia, Iran and North Korea. Trump wanted that vote to fail. Flake voted for it.

4. Debt Limit and Disaster Aid A September 7 vote on raising the debt limit and extending government funding alongside Hurricane Harvey relief. Trump wanted that vote to pass. Flake voted against it.

Each time the bills in question passed.

Flake’s rhetoric and decision to call it quits are certainly sending a very obvious message. His votes tell a different story.