If Trump Wins, Sure Looks Like Clinton Email Investigation Will be Reopened 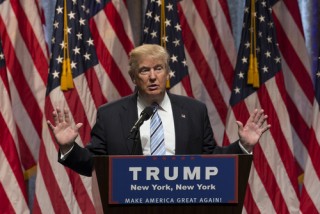 Former New York Mayor Rudy Giuliani told a revved up Republican crowd on Thursday that “if Donald Trump becomes president, the statute of limitations is not up. There is no double jeopardy. We can reopen the case.” This isn’t the first hint that we’ve gotten that a possible President Trump would go after Clinton for her use of private email server while serving as Secretary of State. In fact, the Republican presidential hopeful has said so himself.

“Go get ’em,” one Republican reportedly shouted to Giuliani after he made that announcement at the event in Cleveland, according to The New York Post.

After hitting her hard during his Republican National Convention speech, Giuliani kept on swinging.

“She’s going to be running to try to prevent getting an orange jumpsuit,” Giuliani reportedly said. Trump has also said that if he’s elected, he would reopen an investigation.

“If I win, it’s called a five-year statute of limitations. If I win, everything is going to be fair, but I’m sure the Attorney General will take a very good look at it from a fair standpoint, okay,” Trump said in June. If he wins, it’s not clear who Trump would appoint as his Attorney General. But if Giuliani, who is also a former federal prosecutor, gets the job, a renewed review of the case seems very probable.

Earlier this month, FBI Director James Comey concluded that he would not recommend charges against Clinton to the U.S. Attorney’s Office. Comey said that investigators did find that Clinton acted “extremely recklessly” in handling classified material. However, he found that “no reasonable” prosecutor would bring charges. Comey emphasized that he did not believe that Clinton intentionally violated the law.

Legally, it is possible for the case to be reopened once it has been concluded by the FBI, especially if new evidence comes to light. Double jeopardy would only apply if Clinton had actually been charged, and tried.