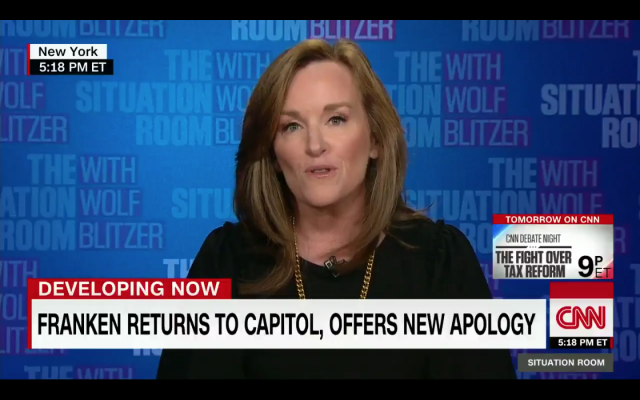 Standing just outside of the conference meeting room, Rice addressed a small gaggle of reporters. She said:

I don’t have time for meetings that aren’t real.

The morning meeting was not previously scheduled to address sexual harassment and abuse allegations made against Democratic Party members in particular. Still, Rice’s early departure signals the increasing frustration many Democrats feel as their party closes ranks around its members accused of sexual abuse and harassment while heaping scorn on Republicans accused of the same.

To wit, the Democratic Party has steadfastly resisted calls for Senator Al Franken (D-MN) to resign in the wake of multiple women accusing the former Saturday Night Live star and current legislator of groping and other forms of abuse–some of which he has admitted to.

Simultaneously, Democrats appear to be taking a slightly harder stance with Representative John Conyers (D-MI), a storied progressive and co-founder of the Congressional Black Caucus. After sexual harassment settlements recently came to light, Conyers was urged by many Democrats to step down from his committee chairmanship–but the party has stopped short of a full-on push for Conyers to retire.

Rice has previously called for both Franken and Conyers to resign–and blasted Nancy Pelosi for standing by embattled Democrats. In a November 28 interview, Rice said:

People are seeing us circle the wagons and protect our own. Whether it’s Donald Trump not coming out against Roy Moore, and supporting him to the extent that he is, or if it’s Nancy Pelosi protecting John Conyers and saying that she leaves it up to him to make the right decision. I think that’s ridiculous.

A day before, on November 27, Rice retweeted Lis Smith, a Democratic Party operative, who provided the essence of the argument against both men via Twitter. Smith wrote:

This is not good enough. Democrats can’t proclaim to have any upper hand as long as [Conyers], Franken, etc are in DC. This is not about gamesmanship, it’s about having a backbone. If we “believe women” then kick these guys out.