Hulk Hogan’s Case Now in the Hands of the Jury 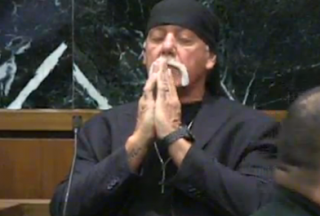 In his closing argument on behalf of Hulk Hogan, attorney Ken Turkel painted a picture of a sad, shy man named Terry Bollea, who spends most of his life playing a tough, confident character named Hogan. “I want you to imagine the fact that for 35-plus years, he’s essentially an actor, an entertainer who has played the same role,” likening him to Captain Kangaroo. “When he leaves his house…nobody cares who Terry Bollea is.”

“You know Hulk Hogan, he wears the yellow bandanna, rips it off on stage, it’s a big deal,” Turkel said, referring to people’s impressions of the Hogan persona. He contrasted this with Terry Bollea’s reality. “He wears it because he’s self-conscious about the size of his head.”

Terry Bollea is a private, sympathetic figure, according to Turkel. At the time the sex tape was made, he was in a particularly low point in his life, his marriage recently ending. “He was sad because he hadn’t had a home-cooked meal,” Turkel said, referring to how Heather Cole described him at the time she slept with him on video.

This potrait of Terry Bollea was meant to dispute Gawker’s argument that Hulk Hogan is a public figure who forfeits the privacy rights that the average person would have. Turkel said that Nick Denton, Gawker’s founder,  doesn’t get to decide when something is private and when it is not.

Gawker attorney Michael Sullivan countered in his closing that the one piece of evidence that Turkel ignored is the video itself. Or, more specifically, the short version Gawker posted. Sullivan emphasized that the clip posted on Gawker contained just nine seconds of sexual activity. He discussed the approach that then-editor A.J. Daulerio took with his coverage. Daulerio acknowledged a desire to see the sexual activity, while countering that desire with the discomfort that comes with watching a childhood hero having sex. The brief sexual activity included in the Gawker post went with the story that was written.

Sullivan argued that the “broader context” of the Gawker post is important. He said all of the other media coverage of the video, as well as Hogan’s graphic discussion of his sex life on the radio made it fair game for Gawker to post their highlights of the video. Gawker’s post was just part of the same conversation that was already going on.

Sullivan didn’t buy the excuse that Hogan was in character during media appearances because “the rest of us can’t tell them apart.” He argued that because Hogan discussed the sex tape in public as Hulk, it makes no sense to expect to be treated as Terry Bollea now.

Going beyond questions or privacy, Sullivan questioned the nature of the tape and its creation. He wondered if the whole thing was a publicity stunt, noting Hogan’s testimony discussing the wrestling concept of a “work,” a scripted event that performers make look real, which he compared to two partners dancing. Sullivan asked if the whole sex tape incident was one big “work” plotted by Hogan and Bubba “The Love Sponge” Clem, whose wife Hogan was with on the video at Clem’s behest.

In his rebuttal, Turkel called Sullivan’s theory that this was a “work” a “Hail Mary,” because Hogan had no idea he was being taped. He said Gawker’s motive in all of this was profit and drawing traffic to their site, and finished by telling the jury that this case is about balancing free speech with a right to privacy.

Now, after all of the testimony, all of the evidence, and the closing arguments, the jury will deliberate. It could take days, hours or minutes. In the meantime, all Hulk Hogan can do is follow the famous advice he gave his adoring fans so many times: take his vitamins and say his prayers.