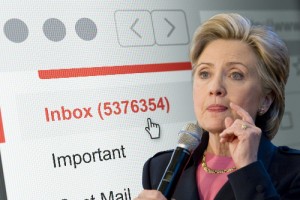 If the past two days have taught us anything, it is that Hillary Clinton‘s use of a personal email server during her tenure at the State Department is a threat to the American way, and even to all human life on Earth. The media’s sirens-a-blaring reaction to the State Department Office of the Inspector General’s report on email practices would lead any rational observer to conclude that the only crime greater than using personal email to conduct State business is the crime of ever believing a word that Hillary Clinton says.

The Washington Post excoriated Hillary in a blistering editorial about the OIG report, the same Washington Post that uncritically published the Republican lie that there were 147 FBI agents investigating Hillary, when the real number was about 12. Mainstream media figures like Wolf Blitzer, Chuck Todd, and even Jake Tapper got in on the act by attempting to paint the report as contradicting Hillary, or even proving her a liar.

Now, this OIG report is separate and apart from the ongoing FBI “investigation,” but it’s all the media really has to go on now, and given the alarm bells being raised, I figured I’d better take a look at the report for myself. One of the key areas that the media has focused on is the fact that while Hillary Clinton has repeatedly said that her use of personal email was “allowed,” the OIG report says it found no evidence she tried to get authorization for such a practice. Liar, amirite?

Page 37 of the report does say that “OIG found no evidence that the Secretary requested or obtained guidance or approval to conduct official business via a personal email account on her private server,” but then again, Secretary Clinton isn’t saying that she requested or obtained guidance or approval. She’s saying it was “allowed,” an assertion that is backed up by many instances in the report which recognize that personal email use, while generally discouraged, is permitted, as per a 2009 regulation which states “Agencies that allow employees to send and receive official electronic mail messages using a system not operated by the agency must ensure that Federal records sent or received on such systems are preserved in the appropriate agency recordkeeping system,” and which is repeatedly cited in the report.

As the OIG report also states on page 5, it wasn’t until after Hillary Clinton left the State Department that personal email use was prohibited, and even then, not completely.

Here’s where never believing a syllable that Hillary Clinton says becomes absolutely crucial, because in order to slag Hillary for using personal email, you have to believe that she made no attempt to preserve those emails, while the OIG report says she did:

This didn’t quite work out because, as the unreported main focus of the report makes clear, the State Department system is a hot-assed mess. If it weren’t, then none of this would be happening, because they’d be able to sort and retrieve emails the way any Gmail user can. But since I’m a reasonable person who doesn’t hate Hillary Clinton and isn’t trying to justify swallowing a year-and-a-half worth of Republican leaks like some kind of journalistic Linda Lovelace, it makes sense to me that a person would think “Hey, if I send an email to someone with a dot-gov email address, they’ll be able to find it if they need it.”

So to be clear, Hillary Clinton’s use of a personal email is not the reason the OIG report says she violated the federal recordkeeping rules, it’s because she failed to turn over her emails when she left State. Here’s what else the report says about that:

Secretary Clinton should have preserved any Federal records she created and received on her personal account by printing and filing those records with the related files in the Office of the Secretary. 98 At a minimum, Secretary Clinton should have surrendered all emails dealing with Department business before leaving government service and, because she did not do so, she did not comply with the Department’s policies that were implemented in accordance with the Federal Records Act. NARA agrees with the foregoing assessment but told OIG that Secretary Clinton’s production of 55,000 pages of emails mitigated her failure to properly preserve emails that qualified as Federal records during her tenure and to surrender such records upon her departure.

The OIG does go on to complain about the missing three months from January to April, which Clinton’s camp says was due to her transitioning to a new address, but which also would not have been an issue if the State Department email system were remotely up to date.

What’s weird, though, and also unreported, is that the OIG report takes a much more generous approach to former Secretary of State Colin Powell, who used personal email and didn’t turn over anything:

NARA agrees that the records should have been printed and filed but also told OIG that any effort to transfer such records to the Department would have mitigated the failure to preserve these records.

Hillary Clinton made such an effort, and when that didn’t work, she turned over everything she had. One more thing that isn’t being reported is that, according to the OIG report, there actually were different rules for the secretaries of state regarding the turning over of material upon leaving State:

The Department has implemented these requirements through various FAM provisions, including one that requires every departing employee to sign a separation statement (DS-109) certifying that he or she has surrendered all documentation related to the official business of the Government. This function is handled for the Office of the Secretary by the Office of the S/ES Executive Director (S/ES-EX). However, S/ESEX told OIG that, as the head of the agency, the Secretary is not asked to follow the exit process. Consequently, Secretaries Albright, Powell, Rice, and Clinton did not sign a DS-109 at the end of their tenures.

Much is also being made of various warnings and entreaties that State employees made urging Hillary to use a government email, but if you read through the report, these amount to mutterings, not orders or regulations. Whatever risks or deficiencies they identified were obviously outweighed, in Hillary Clinton’s judgment, by the benefits of the personal server. That’s an area open for some debate, but it doesn’t constitute malfeasance, and there’s a good case to be made that she was right. There’s no evidence her system was ever hacked, unlike the State Department’s, and it turns out her personal server was a hell of a lot more effective at preserving these records than the State Department’s.

Chuck Todd grilled Hillary about a passage in the OIG report that says she emailed a staffer that “I don’t want any risk of the personal being accessible,” as if there’s something weird about the sitting Secretary of State not wanting every cubicle-dwelling schmuck in the department having her personal email address, an extension of the idea that there’s something weird or paranoid about Hillary not wanting every lying Republican in Congress left over from the impeachment days pawing through her personal emails.

There’s no evidence Hillary broke any laws, and there will probably never be (just ask Fox News), so this is probably the best the media will get. Hillary Clinton basically failed to get Bill Lumbergh his TPS reports, and may have taken Milton‘s red Swingline stapler, and somehow, that’s “devastating” to her chances of defeating Donald Trump.

To borrow The Washington Post‘s phrase, that’s no excuse for this outpouring of “devastating” coverage, and it’s why Hillary Clinton’s emails really are a threat to life as we know it. I know it’s practically a felony to believe anything Hillary Clinton says, but believe me when I say that treating this garbage like this while there’s a guy who might just nuke Europe running for president is the real crime. Shame on all of them if they succeed.