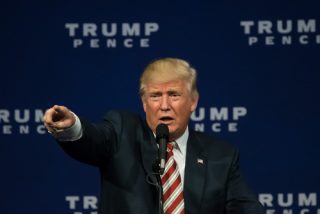 During the campaign, I understood why Donald Trump insisted on moaning about the “rigged system” and the rampant “voter fraud.”   He was gearing up to be the sorest of losers, and was hedging his bets that he could rally an audience for a post-election media empire by inciting anger over imagined conspiracies. But he won. For him to continue railing against the system that handed him the unexpected victory is just silly. Sunday, our president-elect tweeted out the following:

Despite there being a conspicuous absence of actual evidence pointing toward any meaningful voter fraud, Trump continues to take to social media with this nonsense. You’d think he’d have something better to do, what with preparing to run the country in two short months. But apparently, Jill Stein’s demand for a recount is too damaging for Trump’s delicate ego, and his cries (or tweets) of injustice simply cannot be silenced.

That being the case, I’d like to actually analyze his statements.   First, there’s his boast that he won the electoral college “in a landslide.” That’s not true. He won — clearly, and by enough to surpass the label “narrow margin,” for sure. But it wasn’t a “landslide.” Trump, with 290 votes to Clinton’s 232, won 57 percent of the electoral college votes. The last time I checked, 57 percent is a little more than half, and not even close to crushing the opposition. And to put it into perspective, since 1952 alone, the winning candidate has actually won substantially more electoral votes seven times.  Ronald Reagan had 525 and then 489, Richard Nixon had 520, Lyndon Johnson had 486, and Dwight Eisenhower had 457. Oh, and Barack Obama? He won with 332 and then 365. All more than Trump’s 290. But hey, if Trump feels like a more powerful man by bragging about the size of his win, I suppose we all need to allow him to do so, or risk being “unpatriotic.”

I’ll move on on to the more troubling part of his tweet – that Hillary Clinton’s overwhelming win of the popular vote is explained by millions of people who voted for her illegally. There are two aspects of that claim that are patently absurd. The first relates to the logistics of the election process itself. Elections are managed by separate state governments, all of which operate independently. As I’ve written about before, any significant claim of wide-scale voter fraud would require a coordinated effort by several independent state governments. We’ve seen no such coordination. Every state governor interviewed during the election process expressed unwavering confidence in the integrity of the voting system, and no compelling evidence (or even reasonable claim) has since indicated otherwise.

But it’s the second issue that I find even more ridiculous – the lack of underlying cause-and-effect logic inTrump’s claim. Even if millions of illegal voters had somehow infiltrated the polls, there’s no reason to believe that those voters would have supported Hillary Clinton. Hillary Clinton was clearly the favorite horse in the 2016 race. Everyone from pollsters to the Trump team itself expected her to win the election. It seems to me that there would have been little motivation on the part of fraudsters to flip the election her way. If there were indeed a sinister team of fake voters, it seems awfully odd that they’d be motivated to cast ballots for the person already expected to win. Furthermore, if the election has taught us anything, it’s that demographic predictions aren’t always accurate.   Many voters initially expected to support Clinton by enormous margins (women and Latinos, just to name two such groups) failed to do so in the predicted numbers. Accordingly, there’s no reason to believe that fraudulent voters (if they’d existed) would have all been “with her.” If there had been voter fraud, it’s just as likely (if not more likely) that such fraud would have resulted in Trump votes.

The electoral college is a disaster for a democracy.

But then, when the electoral college became something that Trump could manipulate for his own purposes, it became “genius.”

The Electoral College is actually genius in that it brings all states, including the smaller ones, into play. Campaigning is much different!

Frankly, I’d assumed that after Trump won and Clinton conceded, he’d spend the next four years (or at least the next four weeks) reveling in the amazing machine that is American democracy. For a man who has held diametrically-opposed views on so many critical issues, it’s bewildering that voter fraud is the one for which he has been unwavering.