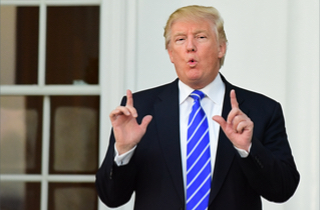 President Elect Donald Trump has made Sunday, November 27th one of his busier post-election days on Twitter so far. After initially criticizing the recounts in three swing states as “sad,” he randomly turned his attention to the issue of him losing the popular vote to Hillary Clinton:

states instead of the 15 states that I visited. I would have won even more easily and convincingly (but smaller states are forgotten)!

The story has permeated the right wing blogosphere since a few days after the election, with the articles generally sourcing these two tweets:

We have verified more than three million votes cast by non-citizens.

We are joining .@TrueTheVote to initiate legal action. #unrigged

Gregg Phillips’ Twitter profile describes him as, among other things, the founder of VoteStand, “America’s first online election fraud reporting app. VoteStand purportedly “uses your geo-location and the user-filed report in order to provide enough evidence to pursue legal action against the person/persons committing the fraud.” Phillips has not said whether the data was extrapolated from VoteStand reports or even what his methodology is in general, turning down requests from journalist because he feared that they would “spin” his data:

No. We will release it in open form to the American people. We won't allow the media to spin this first. Sorry.

As for what else Phillips could potentially be talking about, the Miami Herald suggests that similar claims from other sources in the past have come from a misinterpretation of a 2014 Harvard survey. Snopes, on the other hand, thinks it could tie into a conspiracy theory involving voters who registered when they signed up for health insurance under the Affordable Care Act.

However, neither theory explains Phillips’ claim that he has access to “a database of 180 million voter registrations.” Data from his own VoteStand app would not fit the bill, either. Just like when Trump claimed a man who rushed the stage at a campaign event in March had ties to ISIS, it appears that President Elect Trump just believed what he read on the internet.