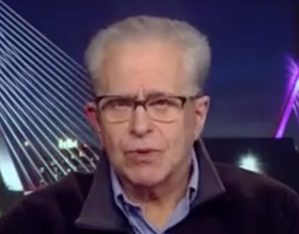 Harvard Law Professor Laurence Tribe has made no secret of the fact that he is a very vocal critic of President Donald Trump.   He has disagreed with many of Trump’s policies, argued that Trump has repeatedly violated the constitution during his first six weeks in office, claimed Trump is mentally unfit to remain office, and at least twice claimed there are grounds for impeachment of the 45th president.

The latest impeachment call from Tribe came early Tuesday morning in response to comments he seemingly did not agree with on the Morning Joe show when the subject of whether Trump could be impeached for his recent tweets claiming the Obama administration attempted to wiretap and bug Trump’s offices.  According to one account of the show, an argument was made that essentially said Trump could not face impeachment based on those tweets because Twitter was not around at the time the impeachment clause was drafted.

Tribe immediately took to twitter himself, seemingly to express his own thoughts about such an “originalist” interpretation of the Constitution.

2/Impeachment Cl. was written in 1787. What’s he mocking? Stupid versions of originalism? The gravity of T’s abuse of power? POTUS himself?

This is not the first time Tribe has weighed in heavily on this topic.  Late last evening Tribe sent out another tweet suggesting impeachment as the proper remedy for Trump’s latest imbroglio.

2/gave him unique access to evidence confirming that accusation is a high crime that could properly form an Article of Impeachment.

LawNewz reached out to Prof. Tribe for additional comment, but did not receive a response by publication time.  We will update the piece if we receive a reply.