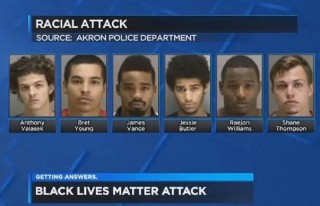 One of the victims reportedly lost consciousness after falling to the ground and being kicked in the head. The suspects allegedly ran off with the victims’ belongings before police responded and apprehended them nearby.

The suspects are five black men and two white men. They have reportedly been identified as Anthony M. Valasek, Raejon W. Williams, Jessie L. Butler, James C. Vance, Shane R. Thompson, Bret D. Young, and Jordan M. McCrae, all between the ages of 18 and 25. All of them are facing riot charges, and all but McCrae were charged with varying degrees of assault. Valasek and Young were charged with robbery. Vance and Williams were charged with receiving stolen property.