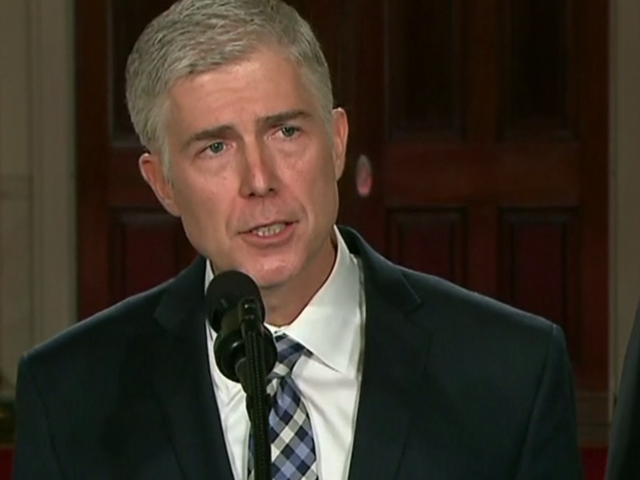 This article was written by the AP investigative team including Larry Neumeister, Garance Burke, and Mitch Weiss.

As a presidential candidate, Donald Trump promised a crusading anti-abortion Supreme Court nominee who would work to overturn the Roe v. Wade opinion that legalized abortion.

But an Associated Press review of decisions and writings by Neil Gorsuch, the federal appeals court judge the president has just chosen to elevate to the high court, turns up no guarantees on how he might rule on the issue.

The review of Gorsuch’s record shows he has taken positions against assisted suicide and in favor of laws that allow employers who object on religious grounds to escape paying for contraception — issues that both sides of the abortion debate have seized on to parse his judicial history.

“With a clear track record of supporting an agenda that undermines abortion access and endangers women, there is no doubt that Gorsuch is a direct threat to Roe v. Wade and the promise it holds for women’s equality,” NARAL Pro-Choice America President Ilyse Hogue said in a statement.

The president of the Family Research Council, which backed Trump, heralded the president’s nomination of Gorsuch as a win for abortion opponents in a TV appearance Tuesday.

“He said he was going to pick pro-life judges that were strict constructionists, and that’s what we appear to have in Judge Gorsuch,” Tony Perkins said in an interview on Fox News Channel. “So, I think evangelicals are going to be very pleased.”

Observers looking for clues on how Gorsuch might rule on specific cases may be disappointed. While the judge has made his views clear on some aspects of the law and expressed his broader judicial philosophy, he has left few tracks that would enable an easy prediction as to how he might rule on a particular case.

The 49-year-old jurist has largely stuck to narrow legal issues while writing about subjects that others sprinkle with inflammatory rhetoric, whether they are related to abortion, reproductive rights, the death penalty or civil rights. It appears he hasn’t written an opinion directly about abortion.

Gorsuch is on a list of experts compiled by The Federalist Society, which was founded to advance conservative ideas in the legal system. He also has contributed to the campaigns of Republican politicians who were anti-abortion.

On the 10th U.S. Circuit Court of Appeals, Gorsuch ruled against the contraceptive mandate in the Affordable Care Act. In 2013, he joined the majority of the circuit in ruling in favor of Hobby Lobby and the owners of the Christian-owned arts and crafts chain, which objected on religious grounds to the Affordable Care Act’s birth control coverage requirement.

Gorsuch wrote a separate opinion in that case in which he outlined what he saw as a moral dilemma facing the family that owns Hobby Lobby and a related company if they were forced to pay for certain contraceptives.

The law requires companies to support payments for “drugs or devices that can have the effect of destroying a fertilized human egg,” Gorsuch wrote. They believe that “violates their faith, representing a degree of complicity their religion disallows.”

The Supreme Court later ruled that employers who object on such grounds do not have to pay, but their insurance still must make contraception available, ultimately reimbursed by the federal government.

After an anti-abortion group in 2015 released secretly recorded videos showing Planned Parenthood officials discussing how they sometimes provide fetal tissue to researchers — which is legal if no profit is made — Utah Gov. Gary Herbert, a Republican, ordered the organization stripped of public funding.

Planned Parenthood denied any wrongdoing and challenged the governor’s move in court.

The case ultimately made its way to the 10th Circuit, which ruled that the governor could not halt funding to the women’s health organization. When a judge requested a rehearing it was denied, but Gorsuch wrote a powerful dissent defending Herbert’s action, which he described as being prompted only by the videos and not by the governor’s longstanding opposition to abortion.

“The panel cited the fact that the governor has long opposed abortion and, from this, inferred that he wanted to punish the group for its lawful abortion advocacy,” Gorsuch wrote in 2016. “But it is undisputed that the governor has held office since 2009 and had taken no action against (Planned Parenthood Association of Utah) until shortly after the release of the videos in 2015.”

Gorsuch also has given some indications of his positions on euthanasia and the death penalty.

In a 2006 book titled “The Future of Assisted Suicide and Euthanasia,” he characterized assisted suicide as “essentially a right to consensual homicide.”

In September 2015 Gorsuch wrote the opinion in a 2-1 decision upholding the death sentence for Scott Eizember, who had gone on a deadly crime spree in 2003.

Eizember was sentenced to be executed for the bludgeoning death of A.J. Cantrell, 76, and to 150 years in prison in the shotgun slaying of Patsy Cantrell, 70, at their Oklahoma home.

His attorneys argued the death sentence should be overturned because a particular juror should not have been allowed to participate. They said the juror stated during jury selection that she was in favor of the death penalty.

Eizember’s attorneys said that raised doubts about the juror’s ability to be fair and impartial.

“Scott Eizember left a Tulsa jail intent on settling a score. He was upset with his ex-girlfriend, Kathy Biggs, because she had tipped off authorities about his violation of a protective order,” he wrote.