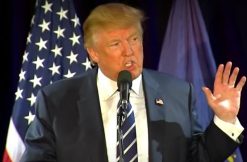 In Alamance County, North Carolina, someone vandalized the local GOP headquarters. Volunteers discovered it when they showed up to work Friday morning.

Photos released by the GOP show graffiti like “F—k Trump YESSIR” on a side wall, and “NA” on the front door. The world “Republican” was also crossed out on a sign.

We’ve blurred out the image, but it’s a four letter word that rhymes with yuck. @NCGOP pic.twitter.com/ejOiQGPbOJ

The Burlington Police Department is investigating, and released surveillance footage of a suspect.

Here’s a closer look of the suspect that @BurlingtonNC_PD just sent out. @myfox8 pic.twitter.com/CwLqe01lfK

This is the second time in several weeks that a North Carolina GOP headquarters was vandalized. Actually, “vandalized” is understatement for the earlier incident. The Orange County office got firebombed. The investigation into that remains ongoing, and no one has been charged.