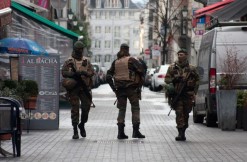 Belgian prosecutors announced Saturday that they’ve charged four people in connection to the March 22 suicide bombings at a Brussels airport and subway station. 32 people were killed, and 270 wounded.

Mohamed Abrini, Osama K., Herve B.M., and Bilal E.M. are accused of participating in the attacks, which was claimed by ISIS. Investigators are still examining if Abrini was caught on surveillance footage accompanying two suicide bombers to the Brussels airport. K. is linked to the subway explosion, prosecutors say.

Their arrests come weeks after authorities took in Salah Abdeslam, the alleged mastermind of the Paris terror attacks, at a Brussels neighborhood. Abrini is also allegedly linked to the Paris attacks, the BBC reports.