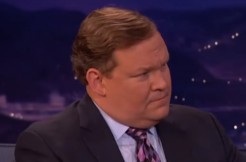 Comedian Andy Richter tweeted Friday that he remembers a detail linked to former House Speaker Dennis Hastert’s ongoing downfall. Richter, who attended Yorkville High School when Hastert was a wrestling coach there, said he remembered a lazyboy positioned to get a view of the boys’ lockeroom showers.

I haven’t thought of it in 30 yrs @mattyglesias

Hastert pleaded guilty last year to illegally structuring bank withdrawals in an alleged attempt to pay hush money. The reported recipient, a former student at Yorkville, was allegedly molested by Hastert decades ago, court filings say. The lazyboy was mentioned in a recent prosecution sentencing memo by another alleged victim, known in documents as “Individual D.”

@chrislhayes @mattyglesias tbh, I don’t find it’s upsetting me now. I’m just so struck by how easy it was to do that. Nobody questioned it.

In total, prosecutors say at least four male students were molested. The disgraced politician won’t face charges for the alleged sexual assaults, however. The statute of limitations ran out.