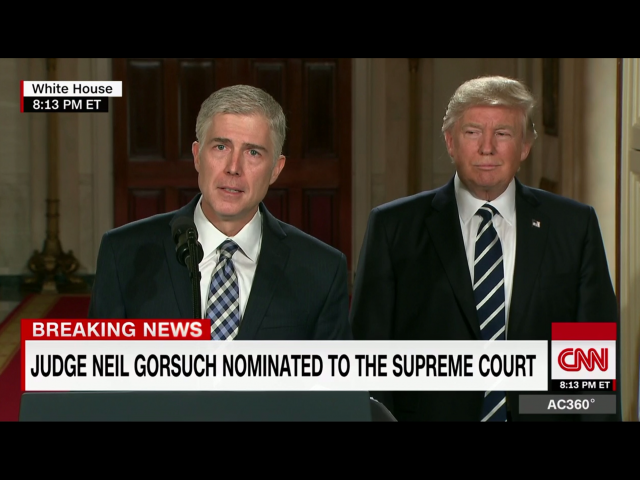 Neal Katyal, the man who served as Obama’s Acting Solicitor General of the United States after Elena Kagan was appointed to the Supreme Court, wrote an op-ed in The New York Times Tuesday night,  that some may find hard to believe.  Katyal actually argued that liberals should support President Trump’s Supreme Court nominee, Neil Gorsuch.

Let that sink in before you consider joining the anti-Gorsuch crusade Democrats are hoping for in fundraising emails appearing in email inboxes this very evening.

In his op-ed, Katyal noted his disagreements with Trump’s “extreme vetting” Executive Order, but instead of railing on and on, he suggests that in a time like this, “public confidence in our system of government depends on the impartiality and independence of the courts.”

Oddly, he then raised a controversial issue of whether Democratic Senators should even vote on Gorsuch considering how Republicans managed to block Obama’s pick, Merrick Garland, for months.  However, such a plan is not feasible because Republican’s control the Senate and thanks to Democratic Senator Harry Reid, the road has been paved for removing the filibuster altogether — even for Supreme Court nominees.

Nonetheless, and perhaps realizing this reality, Katyal writes, “But if the Senate is to confirm anyone, Judge Gorsuch . . . should be at the top of the list.”

Then comes the most important part of the op-ed, where he breaks down his reasoning for supporting Gorsuch in detail, despite being a Liberal Democrat who worked under Obama.

“I have seen [Judge Gorsuch] up close and in action, both in court and on the Federal Appellate Rules Committee (where both of us serve); he brings a sense of fairness and decency to the job, and a temperament that suits the nation’s highest court,” Katyal writes.

He then says there is one fundamental question that should be asked of Supreme Court appointees:

“Is the nominee someone who will stand up for the rule of law and say no to a president or Congress that strays beyond the Constitution and laws?”

On that question, Katyal says he has “no doubt” that Judge Gorsuch is the right man for the job of restoring American’s “confidence that he will not compromise principle to favor the president who appointed him.”  Instead, he says Gorsuch can be counted to essentially buck the president that appointed him like Elena Kagen did when she voted against a portion of Obamacare.

In sum, Katyal says Gorsuch has shown “conviction [that] will serve the court and the country well,” even in immigration cases.  He says Gorsuch will be the type of justice “who does his best to interpret the Constitution or statute and apply the law of the land without prejudice” and that style “could go far to restore faith in the highest court of the land.”