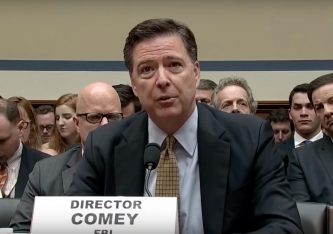 The former chief ethics lawyer in the George W. Bush White House (but now Hillary Clinton supporter) has filed an ethics complaint against FBI Director James Comey over the letter he sent to lawmakers on Friday.

Richard Painter worked in the White House Counsel’s office between 2005 and 2007, serving as the chief ethics lawyer for then-President Bush 43.  On Sunday, Painter penned an op-ed in The New York Times explaining his decision to file an ethics complaint against the FBI Director.

“The F.B.I.’s job is to investigate, not to influence the outcome of an election,” Painter wrote in the op-ed.  “And that is why, on Saturday, I filed a complaint against the F.B.I. with the Office of Special Counsel, which investigates Hatch Act violations, and with the Office of Government Ethics.”

The Hatch Act generally prohibits employees in the executive branch from engaging in certain forms of political activity.

Painter provided LawNewz.com with a copy of the complaint that he sent to both the Office of Special Counsel and the Office of Government Ethics, saying the public had a right to see it.

“I write to request investigation of apparent violations of the Hatch Act by the Director and perhaps other officials in the Federal Bureau of Investigation (FBI) in connection with highly unusual public statements while voting is underway about the status of an investigation concerning a political candidate, former Secretary of State Hillary Clinton,” Painter wrote in his complaint. “I also request that the Office of Government Ethics ask the FBI to conduct an internal investigation of whether there has been misuse of official position, 5 CFR 2635.702.”

In the complaint, Painter acknowledged that its is unclear “whether the Director of the FBI personally wanted to influence the outcome of the election” based on his actions with respect to the Clinton email investigation, including sending the letter to lawmakers on Friday.  However, Painter argues specific intent is not required because “the Hatch Act and ethics rules are violated if it is obvious that the official’s actions could influence the election, there is not another good reason for taking those actions, and the official is acting under pressure from persons who obviously do want to influence the election.

He then gets to the heart of his argument against Comey:

Absent extraordinary circumstances justifying it, a public communication about a pending FBI investigation involving a candidate for public office that is made on the eve of an election or, as in this case, while voting is in progress, is very likely to be a violation of the Hatch Act. It is also a misuse of official position. The fact that politically motivated members of Congress want the communication to be made publicly only enhances the seriousness of the violation; it is not an excuse.

Painter also spoke to LawNewz.com on Sunday about the argument put forth by some that Director Comey had a duty to update his prior testimony to Congress.  He flatly rejected the idea and provided a number of reasons as to why he believed Comey did not have to send the letter at this time.

Painter told LawNewz.com he believes Director could have sent the letter after the election without having “breached that promise to update” lawmakers about the investigation.  He said this is especially true in light of reports that “the FBI apparently had not even looked at the emails because they did not have a search warrant.”

Painter also questioned why “the letter was written in a way that reflected badly on Clinton when there was no new evidence [cited in the letter] that did so.”  He also believes Director Comey could have asked lawmakers “that the letter would not be released or discussed publicly right before the election.”