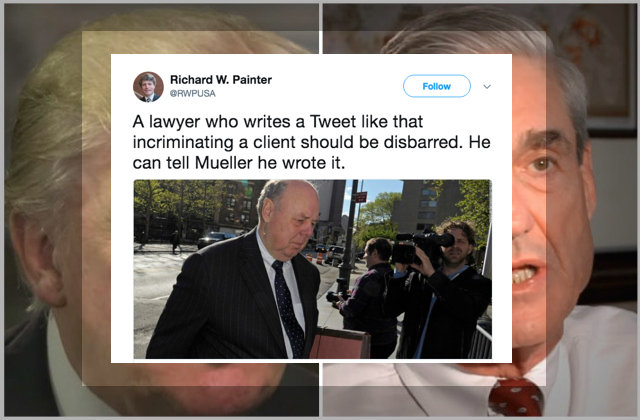 Richard W. Painter currently serves as vice-chairman of Citizens for Responsibility and Ethics in Washington (“CREW”) and is a professor of law at the University of Minnesota. He previously served as chief White House ethics lawyer for President George W. Bush from 2005-2007.

In a tweet sent today at 10:37 a.m., Painter wrote, “A lawyer who writes a Tweet like that incriminating a client should be disbarred. He can tell Mueller he wrote it.”

Painter was referencing allegations that Dowd is the person who actually penned the Tweet sent out by President Trump’s Twitter account in response to news of Flynn’s plea deal with special counsel Robert Mueller. On December 2, at 9:14 a.m., Trump tweeted, “I had to fire General Flynn because he lied to the Vice President and the FBI. He has pled guilty to those lies. It is a shame because his actions during the transition were lawful. There was nothing to hide!”

I had to fire General Flynn because he lied to the Vice President and the FBI. He has pled guilty to those lies. It is a shame because his actions during the transition were lawful. There was nothing to hide!

Many legal experts (and others) claimed Trump’s above-referenced tweet was a poorly-thought-out admission by the president that he obstructed justice because, critics allege, Trump knew about Flynn’s lies when he asked former FBI Director James Comey to go easy on Flynn.

Flynn admittedly lied to agents with the Federal Bureau of Investigation (“FBI”) on various occasions during a voluntary interview with the FBI on January 24, 2017. Those lies traversed multiple topics including Israel and the United Nations, Russian sanctions, and working as a foreign agent for the Turkish government.

Dowd copping to authorship of the controversial tweet would seemingly limit the statement’s impact on any potential obstruction charges leveled against President Trump, however, Painter’s argument is essentially that Dowd’s alleged authorship is farcical.

After sending his initial tweet suggesting that Dowd be disbarred, Painter retweeted former director of the United States Office of Government Ethics, Walter Shaub, who wrote:

Shaub is referencing the fact that Trump’s tweet contained the incorrect term “pled” instead of the legal term “pleaded”–an unlikely mistake for a seasoned attorney to make.