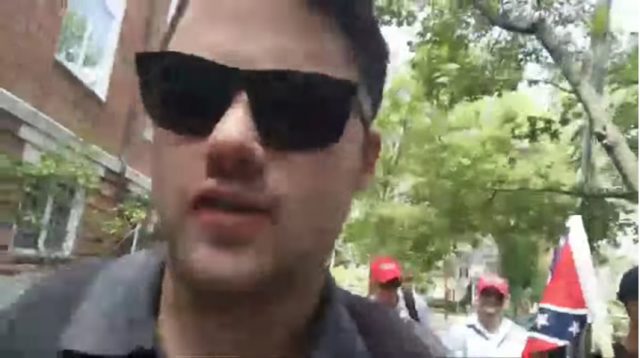 An undergraduate Republican leader who attended white power rallies was recently re-elected by the members of his school’s pro-GOP student group.

James Allsup, the former president of the Washington State University (“WSU”) College Republicans was forced to step down after widespread reports that he attended the “Unite the Right” rallies in Charlottesville, Virginia. Those rallies ended in violence and death earlier this year.

Allsup’s face appeared in many photographs circulated after the death of socialist Heather Heyer at said rallies. His face, illuminated by a tiki torch, became associated with white nationalism. He was scheduled to speak at the night rally, but later claimed to oppose racism.

This week, Allsup was selected by his Republican peers to lead the organization again.

That vote was later “declared null and void” by the WSU College Republicans, however, citing Allsup’s enrollment status.

In a Twitter post just after midnight on December 1, Allsup wrote: “I have officially been re-elected as the President of the WSU College Republicans.” The alt-right Republican attached an image of Pepe the Frog, an unofficial mascot used by the alt-right and Trump supporters (though such an association has been disavowed by Pepe’s creator.)

The group’s current president, Amir Rezamand, spoke with The Chronicle of Higher Education about the reelection. He said, “I think the statement is very clear. Nothing has changed.”

Complicating the issue are the comments of Brian Shuffield, the director of WSU’s student activities office. Shuffield said Allsup won’t be allowed to serve because he’s scheduled to graduate next month and because Allsup isn’t currently enrolled as a student, he can’t hold the leadership position.