Fmr. Trump Tax Adviser Says Donald Had Nothing to do With His ‘Genius’ Strategy 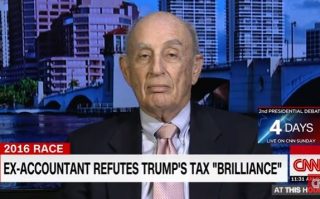 Last weekend, The New York Times published portions of Donald Trump‘s 1995 tax return that showed a loss of nearly a billion dollars that could have allowed him to not pay federal income taxes for up to 18 years, his camp bragged about it. New Jersey Gov. Chris Christie called the move “genius,” and that only Trump has the know-how to fix the tax code, as evidenced by his skill at using it to his advantage. Trump himself has claimed that he “brilliantly” used tax laws to his benefit.

But Trump’s former accountant who actually handled his returns that year is now saying that The Donald had nothing to do with it. Jack Mitnick worked on Trump’s taxes until 1996, and has been saying in a number of televised interviews that it was he, not Trump, who made the decisions. “I did all the tax preparation,” Mitnick told . “He never saw the product until it was presented to him for signature.”

On CNN, when asked if Trump was brilliant or a genius in how he worked the tax code, Mitnick said, “No, those reports were entirely created by us.”

Mitnick went even further in an interview with NBC News on Wednesday, saying, “[Trump] didn’t understand the [tax] code, nor would he have had the time or patience to learn the provisions. That’s a lifetime of experience.”