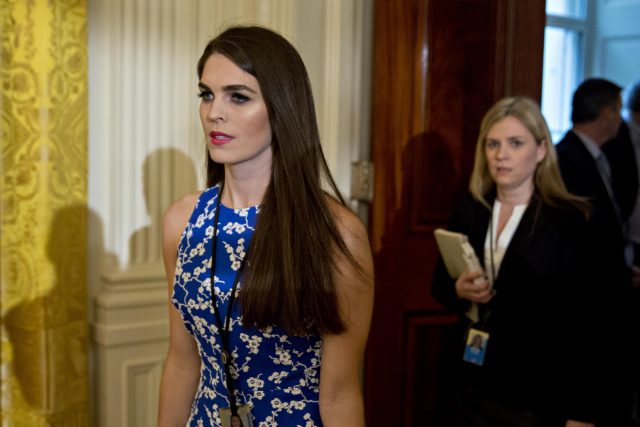 Mark Corallo, a former spokesperson for President Donald Trump‘s legal team, is preparing to speak to Special Counsel Robert Mueller‘s office, and will likely discuss an incident that could land White House Communications Director Hope Hicks in hot water, according to The New York Times. It all stems from the White House’s reaction to the news that Donald Trump Jr. had a meeting with a Russian lawyer during the campaign.

The initial response to questions about the meeting indicated that it mainly had to do with discussion of Russian adoption policies, even though the world found out soon enough that the meeting was set up because Trump Jr. was hoping to get dirt on Hillary Clinton after being promised as much in emails that discussed Russia’s support for Trump. According to sources — whose accounts were not disputed by Corallo when asked by the Times — Corallo warned of giving a misleading explanation, because the information would eventually get out.

Sources recalled that Corallo told them about a conference call he had with President Trump and Hope Hicks, in which Hicks said that the emails proving the reason for the meeting “will never get out.” According to the Times report, Corallo was concerned that Hicks was considering obstructing justice by hiding or destroying evidence, although he acknowledged that it could have been that Hicks merely didn’t think the emails would get out because only a few people knew about them.

“She never said that. And the idea that Hope Hicks ever suggested that emails or other documents would be concealed or destroyed is completely false.”

Of course, merely saying that emails wouldn’t get out is not itself obstruction of justice. While it’s true that an attempt to obstruct justice qualifies as obstruction under the law, there is no indication in the report that Hicks attempted to do anything to hide the emails, which were later released on Twitter by Trump Jr. himself. Additionally, as Corallo reportedly acknowledged, he was not certain of the intention behind Hicks’ statement, and obstruction of justice requires a corrupt intent.

Still, Mueller reportedly has taken interest in the Trump response to the meeting with the Russian lawyer. If Corallo backs up this report during his interview, Hicks may have to explain herself.