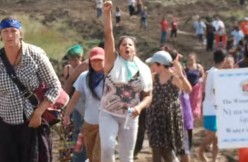 “We appreciate the District Court’s opinion on the U.S. Army Corps of Engineers’ compliance with the National Historic Preservation Act,” they wrote. “However, important issues raised by the Standing Rock Sioux Tribe and other tribal nations and their members regarding the Dakota Access pipeline specifically, and pipeline-related decision-making generally, remain.”

Now, the Army won’t authorize pipeline work on U.S. Army Corps land bordering or under Lake Oahe until it can sort out “whether it will need to reconsider any of its previous decisions regarding” the construction site under federal law. There are postponing construction there. Work had already been suspended as the federal court made its decision about the injunction.

The North Dakota Pipeline has been planned since 2007, but it has met with resistance from the local Standing Rock Sioux Tribe. Protestors say construction violates federal law, and will destroy land important to their heritage. Things have tense, with rallies turning violent on Saturday.