FEC is After Trump Big Time for Anonymous Donations, Inflating #’s, Other Violations 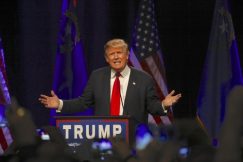 The Federal Election Commission on Tuesday sent its harshest letter yet to Donald Trump’s campaign committee, outlining violations that include accepting large donations from anonymous sources, taking contributions above the legal limits, failing to file reports of last-minute contributions and more.

It wasn’t the first such admonishment of the Trump campaign by the agency; he has been warned about similar matters in the past. This letter refers to Trump’s campaign finance report covering the period from Oct. 20-Nov. 28, 2016.

Both of Trump’s joint fundraising committees were called out by the FEC for some of the same kinds of transgressions in separate letters.

Besides that, Trump’s campaign, which reported raising $328 million for the 2016 election (including $66 million from Trump himself) has been noting refunds to donors who give more than is permissible in an unusual way that inflates his actual fundraising total.

Thanks for your donation, Anonymous D Mr. H27!

Anonymous donations of more than $50 are prohibited. Trump’s joint fundraising committee with the RNC, Trump Make America Great Again Committee, accepted more than $16,000 in such contributions, according to the letter. A Center for Responsive Politics analysis of the filing found 30 pages of donations from donors named “Refused, Refused.” (As in first name: Refused; last name: Refused.)

The letter doesn’t make clear how much of that anonymous money rolled into Trump’s campaign, but the Center for Responsive Politics found $1,300 transferred from the MAGA joint fundraiser coming from a donor named literally named “Anonymous.” (Check out page 5,477 to see for yourself.)

We at the Center for Responsive Politics conducted our own analysis, examining contributions to the president-elect for the entire election cycle, pulling out any name that included a number, symbol or email address, as well as names that included the word “Anonymous” or “Refused.” Using these parameters, we found $22,500 through Nov. 28 from these kinds of questionable sources. Some of these doting donors include Anonymous D Mr H27, Nancy MO5 and Anon Mr H40.

Using this same analysis with Trump Make America Great Again Committee, we found about $19,000 in such strange donor names, mostly from our friend Mr. Refused.

The Trump campaign and the JFC’s must respond to the FEC by Valentine’s Day (probably not with a box of chocolates), and must make refunds or other adjustments within 60 days of receiving the agency’s letter.

The FEC also devoted more than 240 pages of its missive to Trump to pointing out contributions over the legal limit, $2,700 for individuals and $5,000 for PACs per election. Last November, the FEC had similarly identified 47 pages in excessive payments.

That’s not an uncommon mistake; campaigns on both sides this year have had to make refunds to overzealous givers. Last April, the FEC similarly scolded Bernie Sanders with a 645-page letter detailing more than 1,500 questionable donations.

What is unusual is how Trump’s campaign has been dealing with over-the-limit donations once it is aware of them. The right way: If someone gives a campaign $2,950 for the general election, the excess $250 should be reported as a negative amount, with a minus sign, so the amount is subtracted when the campaign’s contributions are tallied.

Here’s what it should look like, from Ted Cruz’s Febrary 2016 filing.

In Trump’s FEC report covering the first 19 days of October, he simply listed the full amount given by a donor and put a note next to it saying “excess to be refunded.” The excess — in the case below, $4,300 ($7,000 minus $2,700) — isn’t subtracted in the tally; that would only happen if the excess amount was listed, with a minus sign in front of it. Thus the campaign’s total receipts are inflated by the amounts that are supposed to be subtracted.

In an amended filing for the same period, Trump used the same method, but included the date when the campaign gave the refund back, such as “excess chargeback on 12/1” above the positive amount. But without a negative number being listed, the campaign gets credit for the full amount.

His attempt to fix it wasn’t much better. Trump’s campaign did report the negative number, as it should, but instead of just stopping there, like the rules say, it added in the original too-big contribution as well.

It’s impossible to determine the amount by which Trump’s totals were inflated without going through every report and doing the math.

“This skewing of the numbers shows the committee’s accountants are quite inexperienced and not all that interested in ensuring adequate disclosure is going on,” said Craig Holman, government affairs lobbyist at Public Citizen.

In addition, in the closing days of the campaign, Trump’s committee received contributions from 56 limited liability corporations, or LLCs. Those can be legal, depending on whether their owners treat them as partnerships or corporations for tax purposes. The FEC wants the campaign to clarify their status.

This article was written Ashley Balcerzak for OpenSecrets.org, and reprinted with permission by LawNewz.com. Researcher Alex Baumgart and Douglas Weber also contributed to the report. The original version of the story appeared here. OpenSecrets.org is a nonpartisan nonprofit organization which tracks money in U.S. politics.