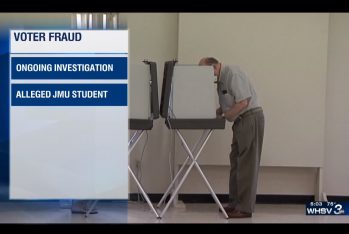 Federal and state authorities, including the FBI, have opened an investigation into alleged voter fraud in Virginia after officials uncovered nearly 20 voter applications turned in under the names of dead people.

Harrisonburg Registrar Debbie Logan on Thursday told Richmond.com the investigation has already uncovered 18 to 20 potentially fraudulent voter registrations.  According to the report, the applications were turned in by the group HarrisonburgVOTES.  Several reports from earlier this month indicate a James Madison student working for the group has admitted to turning in applications from deceased individuals, though he claimed to be acting on his own accord.

Logan says investigators were first alerted to the potential fraud when an employee in the registrar’s office received a new registration in the name of the late father of a well-known local judge.

“When they used a distinguished resident of Harrisonburg’s name and address, it came to the attention of an employee who has worked in the city for many years,” Logan told the new station.

Logan further explained that the fraudulent applications used the name and addresses of deceased individuals but a fake social security number so they would not be flagged by the system.

Republican state lawmakers reportedly held a press conference on Thursday to highlight the case as evidence that voter fraud is a problem that must be taken seriously.

“Often times we hear our Democrat colleagues suggest that voter fraud doesn’t exist in Virginia or is a myth,” said House Speaker William H. Howell “Well it does indisputably exist.”

Del. Mark L. Cole added, “If it hadn’t been for the vigilance of a citizen, this fraud effort may never have been uncovered until it was too late.”

Democratic state lawmakers, of course, were not convinced that this incident is evidence of a larger problem.

“There’s no way any reasonable person could conclude that this was part of an effort to actually cast votes for people that aren’t able to cast votes,” Del. Marcus B. Simon said.

The fraudulent voters remain registered, pending the investigation.  However, Logan told reporters that she is hopeful the State Board of Elections will allow her to cancel the registrations before November 8.  She also stated her office would take appropriate measures should they receive an absentee ballot in the name of one of the deceased individuals.