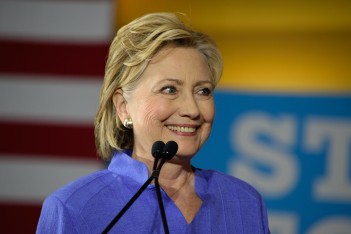 Despite an exhaustive list of findings that wholly refutes Hillary Clinton’s ever-changing claims about her conduct, and finding evidence that Clinton was “extremely careless” in her handling of highly classified information, FBI Director James Comey ultimately decided against recommending charges to the Department of Justice. This move pretty much solidifies the fact she won’t be prosecuted.  And, once again, a Clinton’s entitled feeling of being above the law has been reinforced. She may have dodged a legal bullet, but questions about Clinton’s conduct surrounding the email matter are not going away any time soon, and for good reason.

Over the course of the last 16 months, Hillary Clinton has repeatedly claimed that her use of a private email server was permitted and that she did not do anything wrong because nothing was classified at the time she sent or received it. While many of these explanations and/or excuses for her conduct were at least called into question in May with the release of the State Department Inspector General’s report, Director Comey’s statement on Tuesday left no doubt about the answer to any remaining questions.

When news of the email matter first broke in March 2015, Clinton announced at a press conference that none of her emails contained classified information. She then changed her claim a few months later after the Intelligence Community inspector general announced that they had found classified material when conducting a review of her emails. From that point forward Clinton has repeatedly claimed that none of her emails contained material marked classified at the time it was sent or received. This has turned into a point of contention between Clinton supporters and others who have said the subject matter of the emails, not markings, were relevant in determining whether they contained classified information.

Well, Director Comey cleared that issue up with a rather forceful rebuke of Clinton’s claims. He stated, “There is evidence to support a conclusion that any reasonable person in Secretary Clinton’s position, or in the position of those government employees with whom she was corresponding about these matters, should have known that an unclassified system was no place for that conversation.”

Director Comey’s statement leaves no doubt – Clinton was sending and receiving emails that contained classified material at the time they were sent and a reasonable person in her position should have known what she was doing was wrong.

Clinton has also sought to reassure the American public repeatedly over the past several months by stating that she takes classified information very seriously.  Yet again, the FBI Director’s statement blows that claim out of the water in stating Clinton and her team were “extremely careless” in how they handled “very sensitive, highly classified information.”  He also added that the FBI was essentially convinced that foreign adversaries hacked Clinton’s server because she accessed her emails while in unfriendly countries abroad.

This all should put Clinton in the position of being forced to explain how she is either the least well-informed candidate in the history of American politics or she has been blatantly lying to the American people for more than a year. Neither scenario is good for the expected presidential nominee the Democratic Party. It appears that Clinton’s best argument going forward will be, “I was not indicted, so this is all much ado about nothing.”

Think about that for a moment. Barely escaping an FBI recommendation to move forward with a criminal prosecution in the matter is what now constitutes a “victory” for Hillary Clinton.

It is somewhat similar to what happened with her husband after he was acquitted by the Senate at his impeachment trial.  Bill Clinton was not deterred by any shame or stigma associated with being only the second sitting president in history to be impeached by the House of Representatives.    He was simply happy to survive the matter and then finish out his term.

Similarly, Hillary Clinton is not about to let the FBI’s findings stand in her way of reaching the White House.  Even the appearance of impropriety surrounding her husband’s meeting with Attorney General Loretta Lynch just before this decision was announced was dismissed all weekend by her supporters on various media outlets.

The appearance of special treatment is easily the most troubling aspect of this whole investigation. Director Comey even briefly touched on the issue in his remarks, stating his decision “ is not to suggest that in similar circumstances, a person who engaged in this activity would face no consequences.  To the contrary, those individuals are often subject to security or administrative sanctions.”

However, given Clinton’s status as a major party’s presidential frontrunner, those potential consequences do not apply to her.  She has known it all along and does not care what anyone else might think about it — because it appears she is above the law.