Man Puts Up Photos Of Himself Burning Flag on Facebook, Gets Arrested 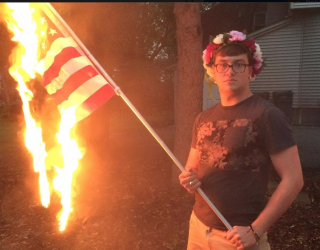 An Illinois man, Bryton Mellot, was arrested Monday morning for desecrating an American Flag and disorderly conduct.  Those charges were later dropped. Prior to his arrest, Mellot decided to put photos of himself burning the flag on his Facebook page. Mellot also wrote a caption to express his disapproval with the United States and the way it has been treating some of its citizens. The original post has been taken down along with the photos, but Mellot continues to have a picture of himself burning the American Flag as his profile picture.

“I am not proud to be an American. In this moment, being proud of my country is to ignore the atrocities committed against people of color, people living in poverty, people who identify as women, and against my own queer community on a daily basis,” Mellott wrote in his original tirade on Facebook.

While Mellot was arrested under Illinois state law section 49-1, which prohibits flag burning and desecration, burning the US Flag is technically legal in the United States. In a 1989 Supreme Court ruling, United States vs. Eichman, the Supreme Court ruled that flag burning can be interpreted as free speech and is therefore protected under the First Amendment. The News Gazette recently reported that the charges against Mellot had been dropped. The police department released the following statement:

“The Urbana Police Department recognizes that this is a case where the right of free speech may have been in conflict with the safety of innocent and uninvolved citizens. Our officers strive every day to achieve a balance between public safety and preservation of Constitutional rights. In this circumstance, our officers acted in good faith and in reliance on a state law that was passed by our legislature in an attempt to do just that. We respect the analysis of the State’s Attorney’s Office and their determination not to proceed with the prosecution in this matter.”

Reactions to the post have been mostly negative with many people criticizing him for his lack of respect for the country.

However, Mellot is not happy with the outrage. In his most recent Facebook post, he said, “So it’d be super-duper if the death threats could stop.”