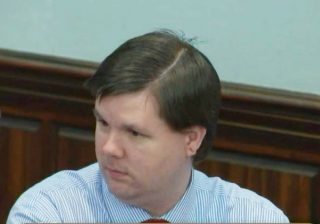 On Thursday, Justin Ross Harris‘ defense team called Dr. Gene Brewer, a psychologist who studies cognition and human memory, as an expert witness. Harris is accused of intentionally leaving his 22-month-old son, Cooper, in a hot car to die. He claims it was an accident, and Brewer testified as to how people are capable of forgetting to do things (like take their son to day care) when they’re going through the motions of their regular routines.

Brewer gave an example of how sometimes when someone is driving, they can go for a stretch of time without having any solid recollection of what they just did. Of course, Harris was only in the car for a few minutes from the time he went from Chick-fil-A where he and Cooper had breakfast, to when he went to work instead of dropping his son off at day care. Harris did, however, often go to Chick-fil-A by himself, so it is possible that he automatically fell into the pattern of driving from there straight to work, Brewer suggested.

Besides falling into the pattern of a routine, Brewer said that being tired can also affect someone’s memory. To counter that, prosecutor Chuck Boring noted that the night before Cooper’s death, Harris got more sleep than he had earlier in the week, when he stayed up late sending messages to women. Boring also pointed out that at no point when he spoke to police did Harris say he was tired or hadn’t slept enough, as an explanation for what he did.

The defense is expected to finish calling witnesses soon, depending on whether they elect to have Harris himself take the stand. After that, the prosecution will have the opportunity to present rebuttal witnesses before each side presents their closing arguments. The case could potentially go to the jury for deliberations as early as Monday.

Court will resume Friday morning at 8:30am ET. We will continue our LIVE trial coverage and analysis on our Facebook page.