Ex-Wife Speaks About Jared Fogle’s Criminal Activity: ‘I Did Not Know,’ but Subway Did 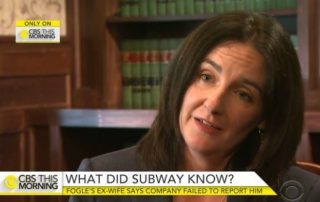 Katie McLaughlin, ex-wife of former Subway pitchman Jared Fogle, appeared on CBS This Morning on Friday to discuss how Fogle’s conviction for child pornography and sex with a minor has affected her. McLaughlin is also in the process of suing the sandwich chain, claiming that they had information about her ex-husband’s behavior and didn’t put a stop to it.

McLaughlin, on the other hand, says she had no clue that Fogle was doing anything wrong, until the FBI showed up at her house with a warrant in July 2015. “That’s how I found out,” she said. “They walked in and you’re just in shock … I didn’t understand any of it, to be honest.” Six weeks later, McLaughlin filed for divorce.

She described how Fogle was a different person at home than he was outside, which is why she was totally in the dark when it came to his sexual transgressions. “He had two lives going on. You know, he was home with the kids and I in one life and he was out on the road in a different life, and he was able to keep those two very separate in a way that I couldn’t even fathom,” McLaughlin said. But she says Subway should have known, and should be held liable for negligence.

The company allegedly received complaints about Fogle’s behavior in 2004, 2008, and 2011. After the allegations against Fogle surfaced, Subway investigated and admitted to the press that the 2011 complaint was “serious,” but had nothing to do with sexual or criminal behavior. Still, they regretted not taking further action at the time, saying, ““We regret that this comment was not properly escalated or acted upon.”

Subway did not give CBS a comment about the lawsuit. Fogle is currently serving a 15-year prison sentence.