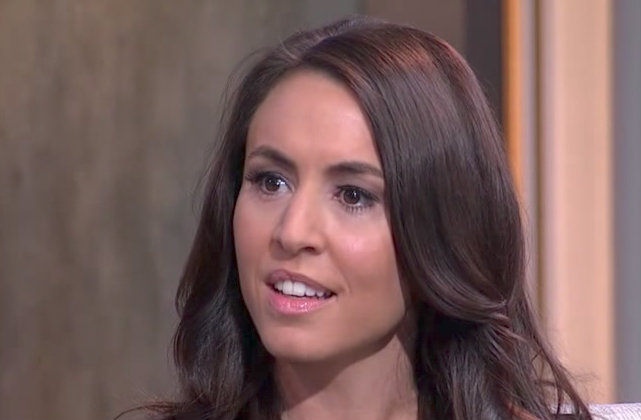 Former Fox News host Andrea Tantaros’ anti-feminism book, “Tied Up in Knots,” was written by a man, according to a lawsuit that was unsealed on Thursday. The lawsuit, filed by this self-described ghostwriter in October 2016, was originally under seal, but has now become public.

Kind of ironic. Tantaros promoted the book on Fox in early 2016. She said feminism was partially good, but it lead to unintended consequences.

Well, a man wrote that book, according to the complaint. Plaintiff Michael ‘Malice’ Krechmer said that he and Tantaros entered a written “Collaboration Agreement” on or about May 4, 2015, according to the court order. This included a confidentiality provision, so he couldn’t talk about his involvement in writing the book unless he got prior, written approval from Tantaros. That was terminated and replaced by an oral “Ghostwriting Agreement” where Krechmer would get $150,000. According to the court order, Krechmer claimed he was only paid $30,000, and Tantaros allegedly wanted him to sign another non-disclosure agreement stopping him from even saying he was an editor on the book, even though she already named him in the acknowledgements. He then sued to get the book’s copyright.

Tantaros’ attorney Judd Burstein told LawNewz.com that Krechmer’s allegations were “beyond false.” Burstein made some pretty bold claims, telling LawNewz that there is evidence Fox News is behind the Krechmer lawsuit. He argues that “Malice” (the plaintiff), who has appeared on the network before, is trying to curry favor by filing his complaint.

(Tantaros sued Fox in April. She said the network used “sock puppet” accounts to attack her on social media.)

Burstein also told LawNewz.com on Friday that there is evidence the seal on Krechmer’s lawsuit was violated. He pointed toward a June 24, 2017 New York Times article. In it, a reference was made toward a “ghostwriter of Ms. Tantaros’ book.” Krechmer was never named in the piece. Burnstein told LawNewz.com that never before had “Malice” been publicly called a ghostwriter in connection to “Tied Up in Knots.” He now wants the court to treat both the “sock puppet” and Krechmer lawsuits as connected.

It may well be that he’ll get a sympathetic ear from the judge. Here’s what the court order says.

“To the contrary, the Court finds it difficult to account for apparent third-party knowledge of this matter and of the parties involved without concluding that plaintiff or plaintiff’s counsel may have violated this Court’s sealing order, and this violation may have been deliberate,” wrote U.S. District Judge Katherine B. Forrest. “The Court is particularly troubled by the submission it received from counsel to a third-party in unrelated litigation against defendant. The submission stated, without explanation, that this attorney ‘inferred’ the identified of the parties here and requested information from this lawsuit.”

Fox News, which has denied allegations from the “sock puppet” complaint, doesn’t have much to say about the Krechmer situation. “This is a financial dispute that Fox News has nothing to do with,” a spokesperson told LawNewz.com.

A Fox News source with knowledge of the Tantaros case did have something to say, however.

“As the opinion itself notes, Krechmer’s identity is a matter of public record given his assistance is acknowledged in Tantaros’ book,” the source told LawNewz.com. “There was nothing to stop us from finding and speaking to his lawyers. Also, as Judd Burstein knows (but Judge Forrest did not), Burstein himself confirmed to us the existence of a litigation that he claimed affected his ability to produce documents relating to Krechmer.”

LawNewz.com followed up with Burstein again for comment about that statement.

“Completely false in that I never stated that there was any litigation with Krechmer,” he said. “When we file our new papers on Monday, we will be submitting an Affidavit from my associate confirming that I refused to tell Ms. Goldstein who the parties to a litigation were. Moreover, there was nothing on the Court docket at the time which identified either lawyer in the case. So how could she have, to use her words, ‘inferred’ that she was writing Judge Forrest about the correct case because of the identities of counsel in the case?”

“Ms. Goldstein” is Linda Goldstein, an attorney for Fox News.

“We knew that Judd was refusing to give Fox News documents related to Krechmer’s role in the book based on a pending Doe v. Doe lawsuit,” the Fox News source told LawNewz.com. “We simply figured out who the parties were, which wasn’t exactly a challenge.”