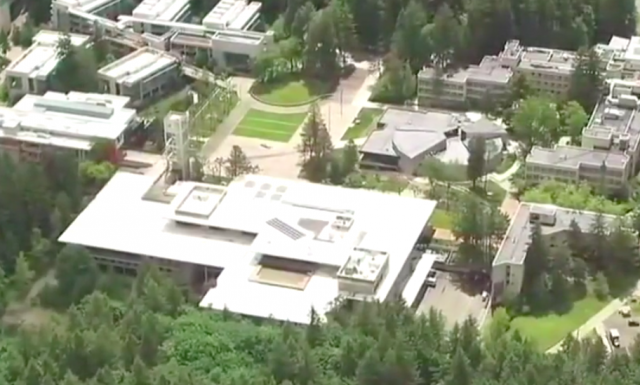 Despite the lack of an active threat, Evergreen State College closed its campus after a man left a threatening message at the Thurston County Dispatch Center in Washington State Thursday morning.

A yet to be identified person called 911, saying, “Yes, I am on my way to Evergreen University now with a .44 Magnum. … I am going to execute as many people on that campus as I can get a hold of. You have that, what’s going on here, you communist scumbag?”

The college shut down its operations Thursday and Friday to allow law enforcement to search the campus and reopened again on Saturday.  The school announced it would be closed to students once more last night, however, citing law enforcement officials reviewing new information regarding the threat.  They stressed that no active threat was present on campus.

“Even though we had planned to be back in class on Monday, it’s important to give law enforcement an opportunity to evaluate their new information,“ said Sandra Kaiser, the college’s vice president for college relations.

Evergreen has been marred by controversy amid student protests this past month.  Protests erupted over increasing racial tension at the school, spurred by incidents such as a professor objecting to a request that white students and staff stay off-campus for a symbolic “day of absence”.  Evergreen has had a similar event each year; however, this marked a change from their previous customs: students of color typically met off campus to discuss racial issues.  When the professor rebuked the new change to the event, protests against the professor ensued.  The student demonstrators were seen as emblematic of similar movements across college campuses that some have cited as infringing upon free speech and being intolerant of differing points of view.   It is unknown if the threat has a direct connection to student protests.

A decision will be made Monday night as to whether the campus will be open on Tuesday.

Have a tip we should know? [email protected]com