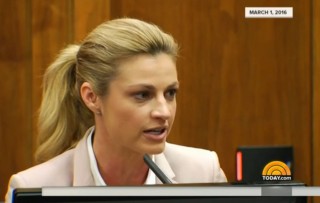 Mari Fagel Henderson is a contributor at LawNewz.com. She is also a Los Angeles based attorney who currently works at a personal injury firm.

Jurors in the Erin Andrews civil case awarded the former ESPN reporter a staggering 55 million dollars for the emotional distress she has suffered as a result of negligence by the Nashville Marriott she was staying at when she was placed next door to, and secretly recorded by, co-defendant Michael Barrett. It is one of the largest verdicts awarded in Tennessee in the last 10 years. While the amount awarded is 20 million dollars shy of her 75 million dollar request, it is still a very large amount to award to a plaintiff. The sum of the award is meant to compensate Andrews for her emotional pain and suffering, which begs the question – is $55 million too much?

This is certainly the first question defense counsel was likely thinking when the verdict was handed down Monday afternoon. Unlike economic damages, jurors are left to speculate as to what monetary value to place on Andrews’ emotional harm as a result of the nude video. So when they came back with an award of $55 million, the question is, what is that based on?

After receiving news of the verdict, Andrews took to her twitter to thank the jurors, and her supporters. However, it is unlikely Andrews will be getting that 55 million deposited in her bank account anytime soon.

First of all, the jurors apportioned 51% of the fault on Michael Barrett, Andrews’ stalker. This means he, himself, is responsible for 28 million dollars of the total sum. It is highly unlikely that a man who served a 30-month sentence for the crime from 2010-2012 has anywhere near 26 million dollars to his name. As a result, his immediate response to the judgment will be to file for bankruptcy.

As for the Nashville Marriott, jurors apportioned 49% of the fault on them. This means the local branch of the international hotel chain is responsible for 26 million dollars of the total sum. Their first line of defense will be to file a motion for a new trial due to excessive damages. In deciding their motion, the trial court judge, Judge Hamilton Gayden, will have to determine whether to order a remittitur.

If one was ordered, a remittitur essentially gives the plaintiff, Erin Andrews, two options: 1) either she agrees to accept a reduced monetary award and the judge denies the defense motion for a new trial or 2) she refuses to accept a reduced award, and the judge grants the motion for a new trial – setting the stage for a second trial in front of a new jury.

Generally, the jury’s award is not to be disturbed unless it is entirely disproportionate to the injury sustained. However, judges have the obligation to review damage awards, and lower them, if the judge deems them to be excessive.

Andrews presented testimony from her therapist, her parents, and she took the stand herself, crying about the emotional distress she has suffered since the nude video was released in 2009. Her parents testified that she is no longer trusting, that she is scared and depressed. Her therapist testified, in part, about her fear when bringing up the scandal to new boyfriends. Andrews testified, through tears, about how ESPN forced her to do a television interview right after the nude video was released.

But what price tag do you put on such harm? And is such an amount “within the range of reason?”

Tennessee personal injury attorney Rocky McElhaney told LawNewz.com, “the verdict is within the range of reasonableness for the harms and losses proven by Ms. Andrews in court.” Thus, McElhaney predicts “it is unlikely that the trial court will reduce the verdict.”

Similarly, Tennessee attorney John Day told us they he finds it unlikely the trial court judge will reduce the award.  “This was a hard-fought jury trial by experienced lawyers.  There is no reason to believe that the jury did not understand the law,” says Day.

However, even if the trial judge decides to leave the jury verdict in place, the defendants are not out of options. The next step would be to appeal the decision to the appellate court in Nashville. Marriott will have to post a bond to prove they have the funds sufficient to compensate Andrews should they lose the appeal.

McElhaney wonders “if the hotel defendants have enough insurance coverage or assets to pay the judgment or if they will file bankruptcy.”

Then, it will be a waiting game, as the case makes its way through the appellate process – with the appellant’s brief filed first, then the respondent’s, then a reply brief, then oral argument before a panel of appellate judges. And keep in mind, this case will be reviewed by appellate judges in Nashville, Tennessee, an area that is arguably more conservative than Los Angeles or New York. As a result, it could be years before Andrews even sees a dime.