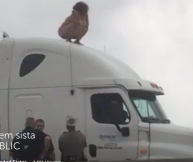 US-290 drivers may be late to dinner tonight, and not for the usual reasons. A nude woman dancing on top of an 18-wheeler truck brought traffic to a screeching halt in Houston today with her smooth moves and exhibitionist nonchalance.

Part of the east–west U.S. Highway had to be closed after a traffic accident, that’s when the unnamed, unclothed woman climbed on top of the truck started dancing and acting erratically until police arrived. The woman refused to come down and after an hour long stand off—which we wish was a dance-off—she was taken into custody via a fire truck by police.

“I was shocked. It was kind of saddening …” said Keaton Gray, a passerby. “As time went on it was less funny and more saddening. It was such a precarious situation,” he said. “She was on the top of the 18-wheeler and you didn’t know what was going to happen.”

The woman is believed to have been driving one of the cars in the three-vehicle traffic accident, according to KHOU.

Officials detained the woman and did not immediately say whether she would face charges.

For the raw, unedited footage, check out Keaton Gray’s Periscope feature-length stream called “Don’t do it to em sista.” (DISCLAIMER: The images and language in the video are explicit). Here’s a five-minute sample of the video first posted by Keaton Gray on Periscope.

For chopper coverage of the incident check out the video below.

Have a tip we should know? tips@lawandcrime.com