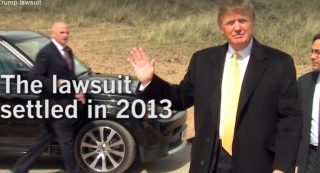 When it comes to winning the female vote, Donald Trump hasn’t had a good week. The flames were ignited during Monday’s debate when Hillary Clinton brought up his comments about a former Miss Universe winner, and the discussion has spiraled downhill from there.

Now, The Los Angeles Times  has dug up some damning documents from an old lawsuit filed by employees at Trump National Golf Club in Rancho Palos Verdes, California. The lawsuit alleges that Trump trolled the golf course when he visited looking for attractive employees, and wanted to fire fat, less attractive women. Documents from the lawsuit contend that managers had to change schedules around so only the good looking women were on duty when Trump was around.

“Donald Trump always wanted good looking women working at the club. I know this because one time he took me aside and said, ‘I want you to get some good looking hostesses here. People like to see good looking people when they come in,” said Sue Kwiatkowski, a restaurant manager at the club in a declaration obtained by The Times.

In another incident, a Trump bodyguard allegedly warned the catering director about Trump’s preference.

“Mr. Stellio (the bodyguard) told me to do this because ‘Mr. Trump doesn’t like fat people’ and that he would not like seeing [the employee] when he was on the premises,” wrote Hayley Strozier in a 2008 sworn declaration.

The lawsuit mostly focused on the club’s work culture in the mid-to-late 2000s, with employees claiming they were not given proper rest breaks. The affidavits and declarations about Trump’s preferences on women were part of a separate retaliation claim, filed by a former restaurant host who says she was fired for age discrimination.

According to The Times, most of the lawsuit was settled three years ago, with the golf course refusing to admit any wrong doing. However, they did agree to pay $475,000 to employees who complained about the inadequate rest break polices. The other claim about discrimination was settled confidentially. We don’t know the terms.

“We do not engage in discrimination of any kind and have always complied with all wage laws, including by providing our employees with meal and rest breaks,” Jill Martin, assistant general counsel for the Trump Organization told The LA Times.