Eliot Spitzer Accuser was Evicted for Prostitution in 2015 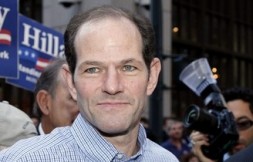 The woman who claimed she fabricated allegations that former New York Governor Eliot Spitzer choked her in a hotel room apparently has quite the history.

According to the NY Daily News, Svetlana Travis, who was allegedly a $5,000-a-night prostitute, was evicted from her apartment on the Upper East Side of Manhattan for using it as a brothel in July 2015. An eviction notice was filed after neighbors and building management complained about suspicious activity, with men arriving and leaving at hourly intervals throughout the day.

DNAinfo reports that tenants had complained about smoke coming from Travis’s apartment soon after she signed the lease in January 2015. When the super investigated, he noticed the heavy traffic of men entering and exiting the premises. A fellow tenant called 911 on April 30 to complain about prostitution in Travis’s apartment, mentioning strange men who were visiting the building. The property manager, Sierra Residential, issued multiple warnings to Travis before landlord Contor Associates took legal action.

In addition to being accused of using the apartment for prostitution, Travis was also reportedly behind in rent. She was also evicted from another Manhattan apartment for owing nearly $6,000 in back rent. Paul Nippes, a New Jersey businessman who was listed as a co-signer on the leases for both apartments, claimed to have no knowledge of Travis’s activities. Nippes said that he never even signed either lease, and told DNAinfo that Travis forged his signature on both. He explains that she had his information from when he agreed to be a guarantor for a different apartment in 2014.

Nippes first learned of Travis’s troubles when Adam Frisch, a representative from Sierra Residential, emailed him on April 7 about possible eviction, encouraging Nippes to contact him. That same day, Frisch received an email claiming to be from the suspiciously named “Lana Travi” saying “Hi! Svetlana had left the apartment in January, what are you talking about?”