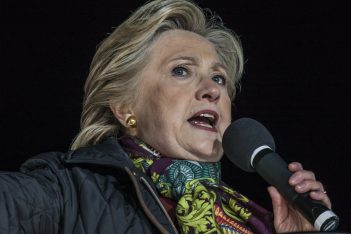 At times throughout the 2016 presidential election, it often felt like it would never end.  Some of the people who complained that it was dragging on forever probably started feeling different around 10:00 p.m. EST on November 8 when the first signs of Hillary Clinton’s “blue wall” was showing signs it may not hold.  By the time the next day rolled around and Clinton gave her gracious concession speech, her supporters were perhaps unhappy, but ultimately many resigned to the fact that it was over — but apparently not all.

New York Magazine is reporting late on Tuesday evening that a conference call took place last week between top members of Clinton’s inner circle and a group of “prominent computer scientists and election lawyers” who urged the Clinton campaign to  consider challenging the election results.

According to the report, the group conducted a complex statistical analysis of voting in Wisconsin, Michigan and Pennsylvania — Clintons’s “blue wall” — and attempted to persuade the Clinton campaign there was justification to challenge the results in those states.

It remains unclear if Team Clinton is seriously considering the advice, but they are running out of time to do so.   The deadline to challenge results in the most important Electoral College states in the group, Pennsylvania, expires on Friday.  Michigan and Wisconsin deadlines expire within a few days of each other next week.

Before anyone gets too excited about a possible challenge, be forwarned that at least one unnamed “senior advisor” to the campaign reportedly told magazine the White House has made it clear they do not want Clinton challenging the results.

Without White House support for a challenge, its safe to assume this election is truly and finally over.