Dylann Roof Will Issue No Evidence When Representing Himself at Sentencing 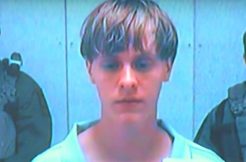 Dylann Roof has already been convicted in the deaths of nine black churchgoers in Charleston, South Carolina, but get this: He’ll present no evidence or even witnesses when he represents himself in the upcoming penalty phase of the trial. Mind you, he faces the death penalty.

Roof says he plans to make an opening statement. He objects to undisclosed evidence being introduced that is now under seal. #RoofTrial

Roof says he doesn’t plan, at this point, to call any witnesses or offer any evidence in his defense #RoofTrial

Attorney David Bruck and his team defended Roof in the case. They argued that he was mentally ill while the prosecution shot down that claim. The judge seemed to concur with prosecutors, stopping the defense from introducing evidence that their client was mentally incompetent to stand trial. The penalty phase of the case is scheduled to begin January 3, though U.S. District Judge Richard Gergel is giving Roof the opportunity to change his mind before then.

#DylannRoof does not intend to present any evidence of mental illness during this phase, when jury decides whether to give him death penalty

As his own attorney, #DylannRoof has right to testify, cross-examine witnesses #RoofTrial

There’s something #DylannRoof wants kept out of evidence in this phase, but it hasn’t been specified. #RoofTrial

Last thing, #DylannRoof asks about competency hearing and whether it would be unsealed – and if so – to redact video visits. #RoofTrial

Gergel is still deciding whether to unseal video linked to Roof’s mental competency hearing because the defendant still faces a state trial over the same crime.

Judge Gergel: generally, the rule is, after a proceeding is over… the need for secrecy has passed. #RoofTrial

Gergel: But what’s complicated here is that #DylannRoof has a pending state trial. So still thinking about unsealing competency hearing

Roof, who plans on giving an opening statement, admitted to killing the churchgoers in a videotaped confession shown to jurors. He told investigators, “Somebody had to do something because, you know, black people are killing white people every day on the street, and they’re raping white women.” He murdered nine people: Cynthia Marie Graham Hurd, 54; Susie Jackson, 87; Ethel Lee Lance, 70; Depayne Middleton-Doctor, 49; Clementa C. Pinckney, 41; Tywanza Sanders, 26; Daniel Simmons, 74; Sharonda Coleman-Singleton, 45; and Myra Thompson, 59.