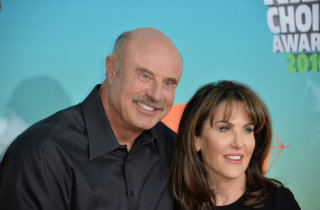 While it’s fallen under the radar of much of the media in the week since it was filed, Dr. Phil (Phillip C. McGraw) and his wife Robin McGraw filed a $250 million lawsuit against American Media, Inc. in Palm Beach County, Florida last week.  American Media is the parent company of The National Enquirer, Radar Online, and Star Magazine, all publications in the celebrity gossip genre. In a 42 page complaint, the McGraws accuse the American Media outlets of libel as well as misappropriation of name and likeness based on articles published from 2003 to 2016.

According to the complaint, the two sides signed an agreement in 2012 extending the statute of limitations on what the McGraws say is a a pattern of defamation if they didn’t sue during that time. As the McGraws frame it, when American Media thought the clock ran out (they insist it hadn’t), they went right back to what they were doing before the agreement was signed.

The McGraws and their lawyers, headed by well-known defamation specialist Lin Wood, have taken an interesting tact in this lawsuit: They’ve made a point of being vague about the content of the articles they claim are defamatory so as to limit “reputational damage they would suffer in the possible event that other members of the media might republish the quotes from their complaint under a claim of purported privilege.” What that means is that since reporters are generally (it varies by state) covered by fair report privilege, which protects them from defamation claims if they cite false statements contained in court records, the McGraws, Wood, and his staff clearly feel it’s best to limit what’s repeated in the complaint.

As a result, being that for most of the allegations, only the date and publication are listed, plus Radar Online’s “Dr. Phil” tag is missing its offending posts, it’s difficult to ascertain the full scope of what the American Media publications wrote. Based on what’s left, here’s what we can tell you about the articles in question:

The complaint refers to all of the articles in question as “salacious and unfounded allegations that are wholly untrue.” As for anything where American Media claims to have relied on court records, the complaint alleges that the publisher “knowingly failed to fairly, completely, or accurately report on the proceedings” and “intentionally took statements from the proceedings out of context.” When reached for comment, an American Media spokesperson issued the following statement to BuzzFeed:

It’s a delicious irony that Dr. Phil, whom a California judge has called a “charlatan” and the Daily Beast has called a “quack” whose “unseemly mélange of exploitation, celebrity parasitism and credential mining goes back years,” has filed a lawsuit against AMI and accused it of being a “trashy tabloid.”

This from the man who visited Britney Spears in the hospital in 2008, then issued a public statement about the visit in violation of her family’s trust.

AMI looks forward to successfully defending itself against Dr. Phil in a court of law, and exposing his stale and fraudulent claims for what they really are.

The quote from a judge stems not from a case that Dr. Phil was a party to, but from the sentencing of two shoplifters who had bragged about their exploits on the eponymous “Dr. Phil” talk show. Federal law enforcement officials saw the episode about the married couple, Matthew and Nora Eaton, which led to an indictment for conspiracy to transport stolen property and a 2010 guilty plea.