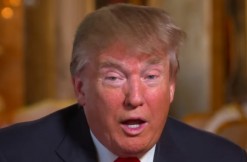 The President of the Hispanic National Bar Association says Donald Trump needs to apologize. Trump had claimed Saturday that a Hispanic judge was biased against him because of race.

“It is outrageous for any man or woman seeking the nation’s highest office to presume that a judge’s Hispanic heritage has any relevance in the proceedings of a class-action lawsuit,” Robert Maldonado said in a statement released Monday. “Mr. Trump’s transparent attempts to inject racial bias into this issue are an insult not just to the Hispanic legal community, but to all Americans. He should apologize for his reckless rhetoric.”

Trump had said at a rally that federal judge Gonzalo Curiel should’ve thrown out a lawsuit against him.

“But because it was me and because there’s a hostility toward me by the judge, tremendous hostility, beyond belief—I believe he happens to be Spanish, which is fine, he’s Hispanic, which is fine, and we haven’t asked for a recusal, which we may do, but we have a judge who’s very hostile,” Trump said.

Here’s the backstory. Trump is in the middle a few lawsuits tied to his humbly named “Trump University,” which went defunct in 2011. (It wasn’t a legally recognized school either, according the New York Attorney General.) One of these suits is a federal class-action started by a California businessman named Art Cohen, who attended classes in 2009. In a suit filed October 2013, he said that place was part of a “fraudulent scheme,” using Trump’s brand name to trick students into thinking they’d really learn his real estate practices.

That’s when Curiel, a judge for the U.S. District Court for the Southern District of California, becomes important. He 1) ruled in October 2014 that Cohen’s lawsuit could proceed, 2) said in June that Trump had to disclose how much money he made from the “school,” and 3) has the most Hispanic-sounding name ever, it’s great.

You probably remember that Trump said Mexican immigrants were rapists when announcing his presidential campaign in June. After quite a bit of backlash, it’s probable that maybe, just maybe, this guy doesn’t feel secure in getting the Hispanic vote.