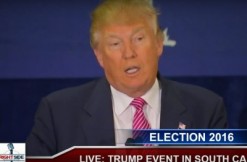 In a press release obtained by LawNewz.com, Republican presidential candidate Donald Trump promised to sue Ted Cruz—if the Texas Senator doesn’t take down “false lies” made in attack ads. But it won’t be a defamation suit, no, no, no. He’s threatening to start a birther lawsuit alleging that Cruz is ineligible to be president.

“Ted Cruz is a totally unstable individual,” Trump said in his statement. “He is the single biggest liar I’ve ever come across, in politics or otherwise, and I have seen some of the best of them.”

What did Cruz say? What horrible, disgusting things did his campaign convey in those attack ads? Trump accuses of Cruz of misrepresenting him as a liberal, not a conservative.

For example, Cruz allegedly had the nerve, the utter gall, to say Trump supported the Affordable Care Act. There’s a handful of other falsehoods floating about, Trump alleges. Telling people he was anti-Second Amendment when he insists he’s “one of the strongest proponents of the right to bear arms.” Construing him as pro-choice when he, “like Ronald Regan, on many issues,” became a pro-lifer.

Then there’s the apparent claim that Trump would appoint liberal judges to federal court. Well, Trump would have you know he only chooses individuals who protects conservative values, so there.

Trump says he’ll insist the Republican National Committee to support on the suit, “and if they don’t, they are in default of their pledge to me.”

So that’s where we are. The Republican candidates are fighting over whether one is too liberal to be president, and the other too Canadian.

Cruz was born up in Canada, but managed to win the Iowa caucus anyway. As for Trump, he’s a high-profile opponent, and some observers think he could actually take the election.

[image via screengrab of Right Side Broadcasting]
–