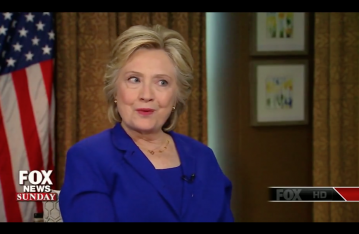 Paul Combetta, the Platte River Networks (PRN) employee, who destroyed Hillary Clinton’s emails after Congress issued a subpoena to preserve the emails, was identified Thursday night.  The same report also revealed that Combetta was given immunity from prosecution by the Department of Justice, even after he apparently lied to investigators during his first interview months earlier.

The New York Times first reported on Combetta’s immunity deal in an article published late Thursday evening.  The article states Combetta’s actions with respect to his work on the Clinton email server were referenced in the FBI investigation summary released on September 2 — but his name was redacted.

According to the FBI investigation summary, Combetta appears to be the individual who deleted Clinton’s email archives from the PRN systems in late March 2015.  The FBI also uncovered evidence of a work ticket referencing a conference call between PRN and Clinton’s attorneys on March 31, 2015, but Combetta was advised by PRN lawyers not to answer questions about the conference call, citing attorney-client privilege.

During his second interview with the FBI in May 2016, Combetta told investigators that he deleted the emails in late March 2015 after recalling an order from Clinton’s team in December 2014 to delete all of the emails that may still exist.  He referred to this recollection as an “oh shit” moment and decided to delete the emails, all the while knowing the preservation order existed.  Combetta also told investigators he used the BleachBit program tool, ensuring the emails could not be recovered by investigators or anyone else.

However, during his previous interview in February 2016, he told investigators that the December 2014 deletion order played no role in his decision to delete the emails.

Despite lying to investigators, Combetta reportedly received immunity from prosecution.

Before Combetta’s identity or immunity deal was reported, the Denver Post published an editorial calling the circumstances surrounding the deletion of the emails a “hard-to-believe shocker that ought to give reasonable people pause.”  PRN is a Colorado based company.

The timing of the deletion is important because it was done after Congress requested Clinton retain all of the emails that still existed.  On Tuesday, Congressman Jason Chaffetz asked the Department of Justice to conduct an obstruction of justice investigation into the deletion of the emails.

However, if reports of the immunity deal are true, it seems unlikely that any sort of obstruction of justice investigation case can go forward.  Combetta would seemingly be protected from prosecution.

That seems to be the conclusion of the Clinton campaign, at least according to what spokesman Brian Fallon told the newspaper.  Fallon said all of this had already been “thoroughly examined by the F.B.I. prior to its decision to close out this case.”

He added, “As the F.B.I.’s report notes, neither Hillary Clinton nor her attorneys had knowledge of the Platte River Network employee’s actions. It appears he acted on his own and against guidance given by both Clinton’s and Platte River’s attorneys to retain all data in compliance with a congressional preservation request.”

“If the FBI and the Department of Justice gave this witness transactional immunity, it is tantamount to giving the triggerman immunity in a robbery case,” Gowdy said.

Transactional immunity is a much broader form of immunity that “protects the witness from prosecution for the offense or offenses involved,” according to the DOJ.

Combetta is the second individual reported to have received immunity from the Justice Department during the Clinton email investigation.  Earlier this year, reports stated Clinton aide Brian Pagliano also received an immunity deal from investigators.  Thus, the man who set up and managed the Clinton email system and the man who essentially destroyed the system have both received immunity from prosecution in the case.

As LawNewz.com reported earlier this week, Comey will be back on Capitol Hill later this month to testify before the House Judiciary Committee as part of the annual oversight hearing.  The Director has already said he expects to be asked many more questions about the Clinton investigation, and this issue will almost certainly be on the list.