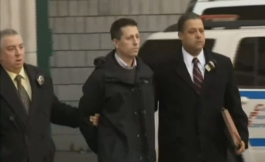 David H. Newman, a distinguished Emergency Physician and Director of Clinical Research at Manhattan’s Mount Sinai Hospital was arrested on Tuesday following accusations that he drugged, groped and masturbated on a female patient’s face. That’s just the start.

The 29-year old woman contacted police on Jan. 12 following an emergency visit room for shoulder pain. She informed the authorities that the assault happened between midnight and 2 a.m.

Prior to an x-ray, nurses provided the woman with pain pills and morphine. According to law enforcement, Dr. Newman then entered the room and gave her another shot of morphine; this coming after the patient informed Newman she already received one. If true, this is not only creepy, it’s incredibly dangerous.

Investigators say the woman then slipped in and out of consciousness, incapacitated by the drugs, and felt Dr. Newman grab her breast and ejaculate on her face. The woman then put her hospital gown in a plastic bag to preserve it as evidence, a law enforcement official speaking anonymously said to The New York Times.

According to authorities, another woman, who came forward after reports emerged implicating the doctor, claims Newman groped her on multiple occasions — the instances occurring months apart.

Newman is a prominent doctor who has pushed for reforms in emergency room care (patient groping aside), wrote in favor of improving doctor-patient relationships (clearly!) and authored the critically-acclaimed book Hippocrates’ Shadow: Secrets From the House of Medicine.

The former U.S. Army Reserve, who also teaches at Columbia University, is accused of targeting young woman seeking medical treatment. Dr. Newman now faces charges of sexual abuse and forcible touching in connection with both incidents. He appeared in court on Tuesday night where a judge ordered him to be held on $50,000 cash bail or $150,000 bond.

Ironically, the back cover of Newman’s book says it exposes “the patterns of secrecy and habit in modern medicine’s carefully protected subculture.” Let’s hope Dr. Newman is the anomaly and not part of something more insidious.