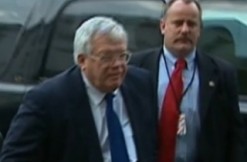 Dennis Hastert, former Speaker of the U.S. House of Representatives, wants a federal judge to reschedule his sentencing hearing. The 74-year-old’s reason: He needs time for medical treatment, even after entering a hospital in November.

Back in October, he pled guilty to breaking banking laws. The official charge was illegally structuring cash withdrawals to evade bank currency-reporting requirements. In other words, he’s been accused of trying to pay a mystery person $3.5 million to suppress “prior misconduct.”

He won’t say who that individual is, though. So there’s no official reports about what that shadiness was about.

Nonetheless, anonymous sources told the Associated Press: Hastert allegedly wanted to snuff allegations that he’d sexually molested someone when he was a wrestling coach in Illinois. Then there’s Jolene Burdge, who told ABC News Hastert molested her brother Stephen Reinboldt, who died of AIDS in 1995.

Though Hastert was released from the hospital on Jan. 15, he is a walking collection of ailments. He had a stroke some time ago, and then there’s the blood infection. He also needs a leg brace and walker to get around. Doctors think he’ll need at least six weeks of home care.

The sentencing hearing was originally scheduled for Feb. 29 in a U.S. district court, but Hastert’s attorneys want it in March since their client’s medical situation apparently slowed their preparation. Federal prosecutors are expected to accept the delay, according to ABC Chicago.

Hastert may not face much prison time, according to The Chicago Tribune. As part of the plea agreement, his attorneys bargained the recommended sentencing down to six months in prison, max. In fact, he might only get probation. Mind you, he’d committed a felony, not a misdemeanor.