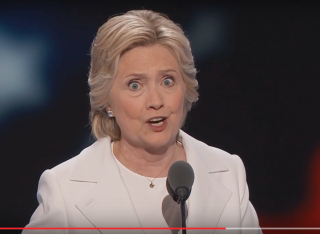 A lengthy interview with Juanita Broaddrick was published on Sunday on Buzzfeed.  Broaddrick first came forward in the late 1990s and accused Bill Clinton of raping her in an Arkansas motel room in 1978 when he was running for governor of Arkansas.  She has also said that she believes Hillary Clinton attempted to pressure her to stay silent about the incident.  The full interview covers all of this and more. It is a very enlightening interview and well worth the short amount of time it takes to read.

So far, the vast majority of the media coverage surrounding the interview has focused on a single paragraph of the interview.  Specifically, the part where Broaddrick was critical of the Trump campaign’s decision to use audio from a 1999 Dateline NBC interview in which she tearfully recounted the alleged rape incident.  In the Buzzfeed interview, Broaddrick said she “thought it was tasteless” for the Trump campaign to use that portion of the interview, especially without notifying her ahead of time.

Focusing on that portion of the interview appears to have allowed media outlets to claim they covered the story, albeit without mentioning any parts of the article that are damaging to the Clinton campaign.

For example, Broaddrick explains in the interview that she decided to come forward again last fall after a series of tweets by Hillary Clinton saying sexual assault victims have a right to be heard. Broaddrick told the interviewer she went “ballistic” upon seeing these tweets:

Every survivor of sexual assault deserves to be heard, believed, and supported. https://t.co/mkD69RHeBL

In January, Broaddrick responded with a tweet of her own that quickly went viral.

I was 35 years old when Bill Clinton, Ark. Attorney General raped me and Hillary tried to silence me. I am now 73….it never goes away.

As the Legal Insurrection blog first pointed out, this is where the Buzzfeed article gets very interesting. After Broaddrick’s tweet went viral, the Clinton campaign appears to have quietly removed some of the candidate’s statements about sexual assault victims from its website.

The Buzzfeed article first points to web archives from September 2015 that show the “campus sexual assault” portion of the website included this quote from Clinton:

However, sometime in February (after Broaddrick’s tweet went viral), the campaign reportedly removed the line “you have the right to be believed” from its webpage.  Although, a video that includes that line is still posted on the website.

The Clinton campaign reportedly declined Buzzfeed’s request for comment about the decision to delete the quote from the website.