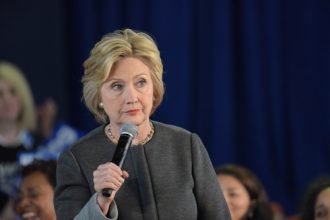 It looks like Donald Trump isn’t the only one out there gearing up to be a sore loser. At least one Democratic member of the electoral college in Washington State is refusing to cast his vote for Hillary Clinton, even if she wins the popular election. The elector, Robert Satiacum, is a Native American who supported Bernie Sanders in the primary; he told the Associated Press on Friday that he refuses to vote for Clinton, because she is a “criminal” and who hasn’t done enough for Native Americans and who has “done nothing but flip back and forth.”

Sure, Satiacum has every right to his own opinions, and to cast his own personal vote however he chooses. But as an elector, doesn’t he have an obligation to vote for Clinton if she wins in Washington?

Well, here’s the state law on the subject:

Sounds pretty clear to me. This is a case of “you took this job, knowing what it entailed, and now you’re refusing to do what you promised.”  The statute also imposes a civil fine of $1000 on any elector who votes for someone other than the party’s nominee.  Satiacum isn’t the first person to take a stand against his official duties; there have been others in the past, and they’ve been deemed “faithless electors.”

The electoral college and the buffer it creates between citizen voters and actual votes cast for president has, at least until this year, always been one of the most hated aspects of the presidential election process. Like delegates at the convention, electors are chosen by the parties who have nominated candidates. On election day, when voters pull a lever (or these days, press a button) for the candidates of their choosing, they’re actually casting votes for the electors of those candidates. On a later date, (this year, December 19th), each state will send the winning electors to cast their official votes for president.  States make their own rules about how and when electors are chosen, and those rules can be changed. Although in this case, it seems a little late for Washington State to make a change prior to tomorrow’s election.

There are state rules that deal with unavoidable glitches in the electoral system, such as an elector dying or becoming otherwise unavailable to cast his or her vote.  Washington’s RCWA 29A.56.340 reads as follows:

“If there is any vacancy in the office of an elector occasioned by death, refusal to act, neglect to attend, or otherwise, the electors present shall immediately proceed to fill it by voice vote, and plurality of votes.”

But, at least according to election law expert and Director of Election Law at Moritz College of Law Ned Foley, it’s not entirely clear that a refusal to vote for a particular candidate would be covered by that statute. Professor Foley wrote:

“In considering this question, one must acknowledge that it’s not easy to fit the faithless elector situation into the statutory language. The idea of the “electors present” filling a “vacancy” suggests that this replacement power is limited to the situation where an elector does not show up for the Electoral College meeting, either because of death or refusal to act or neglect to attend. It doesn’t seem to apply to the situation in which a duly appointed elector does show up and is willing to pay the $1000 civil fine for breaking the pledge.”

There’s also the possibility that Satiacum will show up on December 19, and his public refusal to cast a vote for Clinton will be deemed a “vacancy” under the statute by his fellow electors. Professor Foley continued to explain:

“Thus, maybe it doesn’t matter if Robert Satiacum shows up for the meeting; his announced plan to break his pledge might trigger a “vacancy” that requires an immediate replacement. The argument seems to me, at this moment, a stretch but not entirely implausible.”

There are lots of possibilities for the pandemonium that could ensue following Satiacum’s faithless electing. One confusing scenario would have Satiacum (and maybe some like-minded electors) sending a certificate of electoral votes to Congress while a separate group of electors who have replaced him sending a different certificate of votes. In such an event, Congress would have the discretion to decide which of the two sets of votes to accept. Other potentially impactful issues include the possibility of Washington State’s changing its electoral law between November 8 and December 19, or a disagreement between the two houses of Congress about how to handle a faithless objector.

If either candidate garners enough of the necessary 270 electoral votes, this will all become nothing more than an academic exercise. Until then, though, the impact of a faithless objector remains uncertain.

This is an opinion piece.  The views expressed here are just those of the author.