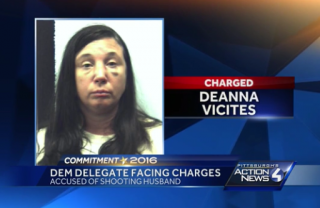 A Democratic delegate, who is listed for Clinton, from Pennsylvania has been charged with the attempted homicide of her husband, who is a local political figure in his own right. WTAE reported that Deanna Vicites, who is listed as an at-large delegate by the Pennsylvania Democratic Party, allegedly shot her husband, Fayette County Commissioner Vincent Vicites at approximately 1am on Sunday.

Both husband and wife told investigators that the shooting was not intentional, but Fayette County District Attorney Richard Bower said it was “not accidental.” According to investigators, multiple stories were given to describe what happened. One version of events alleged that Deanna Vicites may have been suicidal and under the influence of alcohol when she tried to shoot herself and missed, hitting Vincent. WTAE reported that Deanna Vicites has a prior felony conviction, so she was not legally permitted to possess a firearm.

Deanna Vicites was in jail on $250,000 bond as of Tuesday morning. It remains to be seen whether she will be eligible for the Democratic National Convention, which takes place July 25-28 in Philadelphia. DNC rules state that “a permanent replacement occurs when a delegate resigns, dies or is no longer eligible to serve prior to or during the National Convention.” Vicites has not resigned, and she has a preliminary hearing on July 26. A statement from the Pennsylvania Democratic Party said:

We are obviously distressed by this tragic situation. Our prayers are with Commissioner Vicites, his loved ones, and the community he serves. The state Democratic Party is working to address changes in our delegation in an appropriate manner, and we’re confident that will be the case when the DNC is gaveled in next week.

Deanna Vicites, who is Vincent’s second wife, is charged with attempted homicide, simple assault, and other offenses. As of Monday, Vincent was reportedly in stable condition, according to Bower, but the bullet was still in his throat.