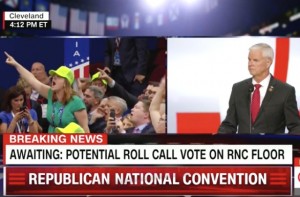 What in the world happened at the convention?

Things didn’t go quite as planned.

In the few weeks leading up to the convention, GOP committee members met and drafted various documents, one such document being the Republican Party’s Rules of the Convention. The drafting committee planned to present its final version to the full convention, and it was expected to pass without much drama. However, as has been the case since Trump entered this election, things did not go as the GOP had planned, and instead of being a mere formality, the vote on the Rules created pandemonium as soon as the convention started.

What was everyone fighting about?

The last time the GOP committee met was August 2012. At that time, Rule 40(b) was on the books and it required balloted candidates to receive a plurality of delegates in at least five states. Note: “plurality” means that the candidate got more votes than any other candidate, even if those votes don’t amount to an actual majority of the total votes. At the 2012 meeting, the committee changed the plurality rules to instead require candidates to get an absolute majority of the delegates in at least eight states. The revision made it much harder for a candidate to reach the convention ballot, and was made primarily to prevent Ron Paul from reaching a ballot against Mitt Romney. An added bonus was that it had the effect of creating the illusion that the GOP was one united front against the Dems.

Now that Donald Trump is the guy binding all the delegates, the GOP has had a change of heart. Suddenly, inclusive politics are better, and pesky old Rule 40(b) shouldn’t keep good candidates out of the race. The NeverTrump faction of the GOP is willing to sacrifice the appearance of party unity if it means making it easier to get an additional candidate on the ballot. Steve King, a Wisconsin RNC delegate who is bound to support Ted Cruz at the convention, advanced a change to Rule 40(b), which would have kept the rule the same for this convention, but changed it back to the five-state plurality for 2020. King’s amendments passed in committee by a voice vote, but to become an official rule, the convention body would need to have approved it tonight.

Bottom line: Building a plane in the air is never a good idea. Building it differently depending on its destination is extra dangerous. The fact that the Republicans couldn’t even get their own convention of the ground without an outbreak of chaos was a hard lesson in these truths.

What exactly happened when the convention opened tonight?

Arkansas Representative Steve Womack, the convention chair, presided over a voice vote to approve the rules. Although there were some pretty loud “nays,” Womack declared that, “the ayes have it.” The delegates of several states flipped out over the voice vote and demanded a roll-call vote. In a move that is weirdly undemocratic for a national convention, Womack refused to conduct the roll-call vote, on the grounds that seven states were required to demonstrate the request for the roll call, and only six states actually wanted one. Weirder still was that nine states had scrambled to file petitions asking for the roll call, but three of the nine later withdrew the petitions, because there had been some apparent shenanigans leading to their filing in the first place. Womack walked off stage, and the convention began under the 2016 version of the RNC rules.

So where does that leave things?

In pretty much the same place they already had been. Rule 40(b) still defines “candidate” in a way that only includes Trump. The GOP rules still require that most of its delegates cast convention votes for the candidate who won their corresponding state primaries. Trump is still the guy who won enough state primaries to guarantee the necessary 1237 delegate votes. Tonight’s uprising may be an important sign of what’s to come for the 2020 election, but for now, it looks like the RNC won’t find a way to dump Trump.