Dem Sen. on Gorsuch Debate: Are Both Parties ‘Going to Sit Here and Pee on Each Others’ Shoes’? 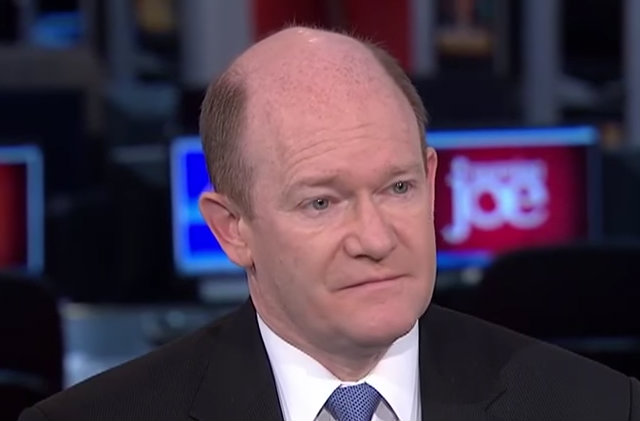 When he is sworn in on Monday, Neil Gorsuch will be the newest Justice on the Supreme Court, and it came at the expense of a Senate tradition, causing doubts about bipartisanship on the Hill. Republicans pushed his confirmation forward against Democratic resistance by using the so-called “nuclear option”: changing the rules so that filibusters are no longer possible for Supreme Court nominees. According to a new POLITICO report about behind-the-scenes wrangling, however, it got one Democratic Senator asking, “Are we just going to sit here and pee on each others’ shoes for the rest of our adult lives? How does this ever get better?”

That was Delaware’s Chris Coons, one of 20 Senators and aides who spoke to the outlet about an attempted bipartisan compromise to the ugly confirmation battle. A group led by Arizona’s John McCain tried to sort things out. This included moderates like Coons, and Susan Collins (R-Maine), as well as Joe Manchin (D-W.Va.), Michael Bennet (D-Colo.), Bob Corker (R-Tennessee) and tea partier Ron Johnson (R-Wisconsin). No one could agree on how to come together.

The second-term senator circulated a proposal calling on senators in both parties to admit they’d abused the Senate rules to the detriment of the institution — and commit to not do so again in the future. It was designed to be painful and cathartic: Republicans would express regret for blocking Merrick Garland last year; Democrats would do the same for a 2013 rules change that set the stage for this year’s nuclear option.

It didn’t carry the day. Plus, senators didn’t see any willingness to compromise from Majority Leader Mitch McConnell or Minority Leader Chuck Schumer. Plus, the parties could never apparently see eye-to-eye on Gorsuch. Republicans presented him as a well-qualified candidate while Democrats, spurred by the way the GOP-led Senate never held hearings on Obama nominee Merrick Garland, put up a fight, and called his views extreme.

“I don’t know how they could conclude that,” Collins told POLITICO about the way Dems construed Gorsuch’s philosophy. “I truly don’t.”

Meanwhile, Bennett reportedly worried Dems should save their political capital for the next Supreme Court vacancy–in which President Donald Trump is likely to replace one of the court’s liberals–while Corker worries that the nuclear option leaves the door open for a possible removal of the filibuster for legislation. After all, in 2013, then-Majority Leader Harry Reid (D-Nevada) implemented a plan to eliminate the filibuster for lower court nominees.

Three Supreme Court justices are at least age 78. Two, Ruth Bader Ginsberg and Stephen Breyer, are considered liberals while the third, swing-voter Anthony Kennedy, is reportedly thinking about retirement. Gorsuch, a conservative who replaced Antonin Scalia, won’t change the court’s ideological balance, but the next vacancy will present a different story.