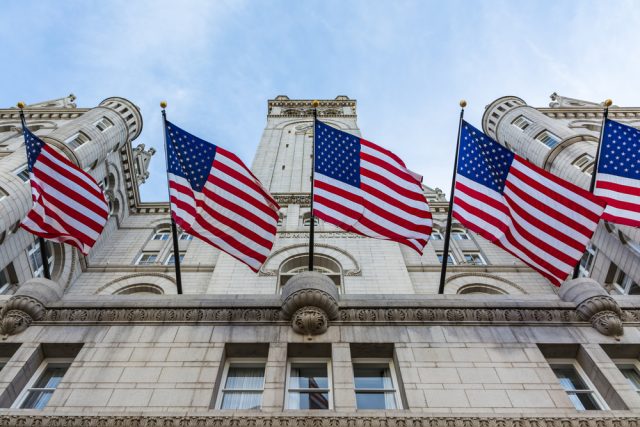 How do you compete with a restaurant at President Donald Trump‘s hotel down the road from the White House? Two Washington restaurateurs argue you can’t — and have sued him over it.

The plaintiffs are Khalid Pitts and Diane Gross, who own Cork Wine Bar and Cork Market & Tasting Room. They allege unfair competition under local law and have filed a lawsuit in D.C. Superior Court against Trump personally and against the Trump Old Post Office LLC, which operates the hotel.

They aren’t seeking monetary damages but are asking Trump to remedy the unfair competition — by resigning, divesting from the hotel or closing it while he’s president. Pitts and Gross are represented by business and government watchdog attorneys who say they are working for free.

Pitts is politically active, having run in 2014 as an independent for a seat on the D.C. Council. Prior to that race, he’d been registered as a Democrat. He previously did work for the Service Employees International Union. Gross, a lawyer, worked from 2003 to 2005 for former Sen. Barbara Mikulski, a Maryland Democrat.

Pitts said the couple’s political leanings are “irrelevant.” He said his dining, catering and events business is down since Trump took office, but he declined to give details. Cork Wine Bar has about 70 seats.

Under constitutional immunity protections, Trump can’t be sued over official acts in the Oval Office. But he can be named in lawsuits for personal actions or those involving his businesses.

Trump turned over management of his companies to his two adult sons and a senior company executive. He retains ownership of his global business empire, which includes the hotel.