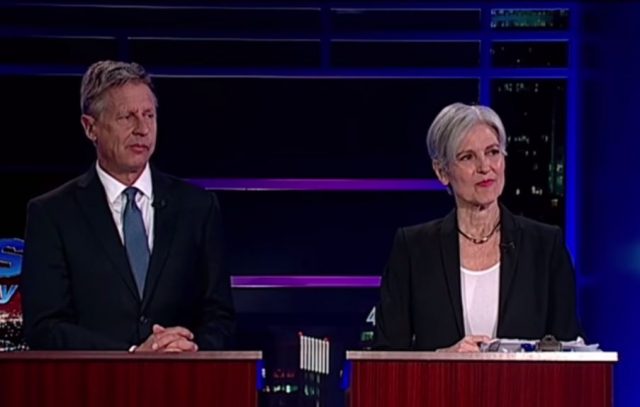 During presidential campaign season, many Americans often hope for alternative to major party candidates. Perhaps no one has hoped harder than third party candidates Gary Johnson and Dr. Jill Stein, who unsuccessfully pushed for greater media attention, including participation in televised debates in the 2016 election, as well as in 2012.. The two sued after the Obama/Romney election in 2012, claiming that the requirement that candidates have at least 15% in the polls was a violation of their First Amendment rights to free speech. The lawsuit was first filed in 2015 and the District Court dismissed it. On Tuesday, the U.S. Court of Appeals for the D.C. Circuit ruled against them as well.

Johnson and Stein claimed that they met all but one of the requirements for debate eligibility, as outlined in a Memorandum of Understanding (MOU) between the Barack Obama and Mitt Romney campaigns in 2012. The other requirements were to be eligible to be president, and to be on enough ballots to mathematically have a chance to win enough electoral votes to win. Both Johnson and Stein had that going for them. The same MOU called for the debates to be hosted by the Commission on Presidential Debates.

Stein and Johnson argued that the MOU essentially monopolized the debates, in violation of antitrust law. They also alleged that it showed “hostility towards their political viewpoints,” violating the First Amendment. The candidates claimed loss of “millions of dollars’ worth of publicity, campaign contributions, and matching funds that ordinarily would follow participation in the debates, as well as the salaries they would have earned as President and Vice President if they had won,” according to court documents.

As far as the antitrust claim that, the court ruled that such laws don’t apply to this case. While antitrust laws are meant to prevent unfair competition, Judge Janice Rogers Brown wrote that this case is a matter of “individual candidates in a political contest for votes.” According to the court, injuries to single competitors aren’t sufficient to show unfair competition. On top of that, the political arena is not the same as a commercial market.

The First Amendment claim was dead on arrival. The court noted that the free speech allegations didn’t make out any clear legal claim.  “To make matters worse,” Judge Brown wrote, “the Complaint omits entirely any allegation of government action, focusing entirely on the actions of the nonprofit Defendants.” Since the First Amendment only applies to government actors, there’s really no constitutional case here.

The opinion concluded by saying, “There may be First Amendment injuries we could invent for Plaintiffs, but those claims were not presented in the Complaint.”