This Obscure 1990 FEC Opinion May Prove That Trump Jr. Committed a Crime 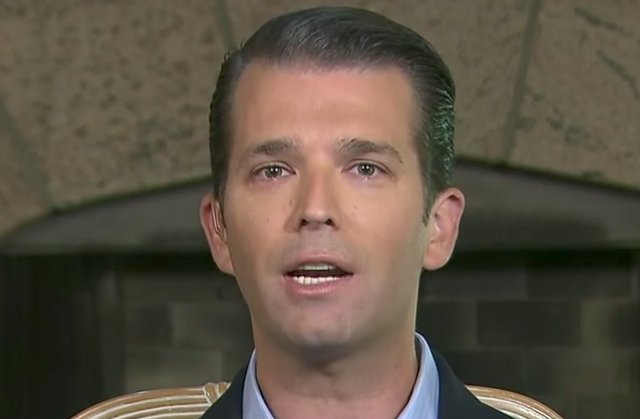 As the chorus to condemn and convict Donald Trump Jr. of a crime based on his meeting with the Russian lawyer grows louder, I have been skeptical that there is any “there, there.” Much of the legal analysis has been based on innuendo and some creative interpretation of the law. Trump Jr. committed treason? I don’t think so. Major stretch. Collusion? Actually, there is technically no such federal law.

However, the most compelling argument I’ve seen thus far is that Trump Jr. might be violating a campaign finance law that prohibits a campaign from soliciting “anything of value … in connection with” an election from a foreign national. But even that is stretch. Why? Because traditionally “in-kind contributions” (i.e. non-monetary contributions) are thought to be things like office furniture, event space, and computers. Would trying to solicit Clinton dirt from a Russian (who Trump Jr. apparently thought was coming from the Russian government) count as anything of value? I didn’t think so at first.

However, this 1990 advisory opinion from the Federal Election Commission is pretty damning for Trump Jr. The opinion was in response to a candidate running for New York’s 22nd Congressional district. He wanted to use poll information paid for by his friend as part of his campaign, and wanted to know if mere information counted as in-kind contribution. The FEC said, yes. The opinion said this:

In other words, mere information can be considered “anything of value” under the law, according to this interpretation.

“I think the solicitation and coordination claims are credible,” Rick Hasen, an election law expert at the University of California, Irvine School of Law, said in an email to LawNewz.com. “The two big questions are knowledge it was a foreign source (now credible if last night’s New York Times story is correct) as well as if the information being provided counts as ‘anything of value’ for purposes of the law.” Hansen said that given the 1990 advisory opinion, this at least merits “further investigation.”

In a tweet Tuesday afternoon, Donald Trump Jr. posted the email exchange that he had with a man who brokered the meeting with the Russian attorney. In the email, Rob Goldstone told Trump Jr. that “this is obviously very high level and sensitive information but is part of Russia and and its government support of Mr. Trump.” So clearly, Trump Jr. knew or thought he was meeting with foreign national, who was supposed to provide something of value to the campaign. But the question is—does this information have any real value in the eyes of the law? Especially considering it turned out the attorney never even possessed said information.

“The FEC’s opinion is relevant in the sense that it means information can be considered a contribution, but there’s a key distinction here,” LawNewz editor and attorney Ronn Blitzer said. “The situation that the FEC examined involved polling data that had already been paid for by someone who was not with the campaign at the time it was collected, and therefore it had a defined monetary value. Based on that, it stands to reason that just getting some dirt on an opponent might not be considered a contribution, unless it was clear that the source of the tip paid for the information.”

Okay, good point. But what if the purported information did have value, and was paid for by the Russians – say if they paid for hacked emails? Well, we will never know because the Russian attorney claims she was never in possession of any of it.

The answer to whether Trump Jr. committed a crime is far from an easy one, but this 1990 memo certainly raises the specter that there is more investigating that needs to be done.