Could Michael Flynn Really Be Arrested if He Discussed Sanctions With Russia? 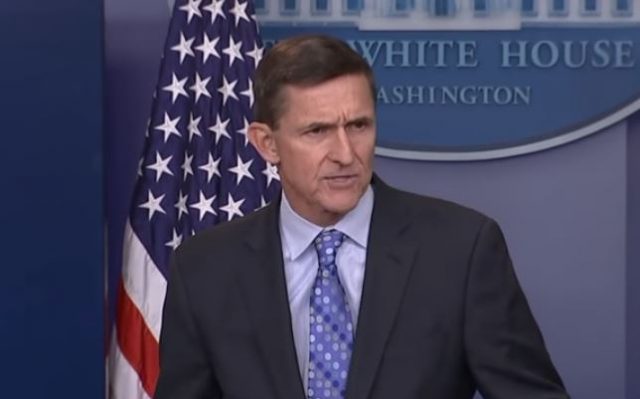 National Security Adviser Gen. Michael Flynn is being investigated by the FBI for communication that he had with Russian ambassador Sergey Kislyak before President Trump took office. Flynn is suspected of discussing sanctions against Russia that President Obama was putting in place at the time, possibly to let the ambassador know that the sanctions would be eased once Trump took office. Over the weekend,  Former George W. Bush speechwriter David Frum, who is now a senior editor at The Atlantic, said that if something like this happened with someone in Bush’s administration, Bush likely “would have had him arrested.”

But what might Flynn be arrested for? Assuming, for the sake of argument, that the reports are true and that Flynn did discuss sanctions and implicit promises to Russia, he could be in violation of the Logan Act. That statute says:

The New York Times reported that some officials familiar with the situation believe that Flynn violated the Logan Act. However, it remain unclear just how the Act would apply, considering that it’s never been enforced before. There’s no question that the Logan Act applied to civilians who communicate with foreign governments, but given that Flynn’s rumored remarks came during the transition period after the election, with Flynn having ties to the incoming administration, it’s a complicated situation without a definitive answer. However, the statute does say that it applies to “Any citizen” who acts “without authority of the United States.” So even though Flynn is currently part of a U.S. administration, he wasn’t at the time, so when he spoke to the ambassador, regardless of what he said, it was likely not with the authority of the United States.

There is also the question of whether Flynn intended to have any kind of influence over Russian conduct related to a dispute or controversy with the U.S. Even officials who told the Post that Flynn and Kislyak discussed the sanctions said there was no evidence that Flynn made any promises that the Trump administration would do anything about them. Without evidence of that, it would be hard to put together a case to show that he intended to affect Russian conduct.

But again, this is all assuming for the sake of argument that Flynn actually talked about the sanctions in a consequential fashion. At first, Flynn denied talking about the sanctions with the ambassador, and he told Vice President Mike Pence that he hadn’t discussed the sanctions. But last Thursday, a representative for Flynn gave a less than firm denial, saying that the general “had no recollection of discussing sanctions,” but “couldn’t be certain that the topic never came up.”

Suspicion that someone may have had significant communication with Russia after President Obama announced his sanctions arose when Vladimir Putin announced that he would not retaliate, and that he would wait to deal with the incoming administration. Trump then lauded Putin’s decision as a “great move.”

Despite that sequence of events, however, it would be very difficult to prove a Logan Act case against Flynn. Between the details of the communications being unclear and the complete lack of historical guidance for prosecutors to work off of, chances are slim that he’ll face any legal repercussions.