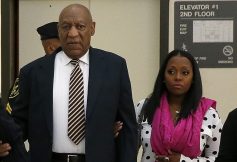 NORRISTOWN, Pa. (AP) — Bill Cosby’s lawyer asked jurors Monday not to view him as a fallen celebrity on trial in a sexual assault case, but as a flawed man “whose infidelities have made him vulnerable” to these types of accusations.

Cosby, 79, the champion of fatherhood and family values, walked into court without his wife of more than 50 years, Camille, or any of their four daughters. He was instead joined by a TV daughter, Keshia Knight Pulliam, who was five when he made her a child star on the “The Cosby Show.”

A prosecutor in opening statements urged the jury to focus on the man, not the fictional characters he created.

“Actors and actresses, celebrities as a whole … they become larger than life. We have a collective imagination of all of the characters they portray and, because of that, we think that we really know them,” Assistant District Attorney Kristen Feden said. “In reality, we only have a glimpse of who they really are.”

About 60 women have accused Cosby of sexually assaulting them since 1965, but Cosby is charged in just one case, involving a former Temple University basketball team employee who said he drugged and molested her at his suburban Philadelphia home in 2004.

“I have three friends for you to make you relax,” Cosby told Andrea Constand as he gave her three unmarked pills, Feden said, quoting from Cosby’s deposition.

Constand, who said she thought it was an herbal product, told police she fell into a stupor, unable to rebuff him as he molested her on the couch. She is expected to testify later this week.

Prosecutors on Monday opened the trial with a woman who broke down in tears as she testified that the comedian had violated her, eight years earlier, at a hotel bungalow in Los Angeles.

Kelly Johnson, of Atlanta, worked for one of Cosby’s agents at the William Morris Agency. Prosecutors hope her testimony will show that Cosby had a pattern of assaulting women after befriending them.

Johnson said Cosby pressured her to take a large white pill that knocked her out. When she woke up, she said, he put lotion on her hand and forced her to touch his genitals.

“My dress was pulled up from the bottom, and it was pulled down from the top, and my breasts were out,” she said, crying. “And I felt naked.”

Defense lawyer Brian McMonagle suggested Johnson was far from credible, arguing that she said years ago that the encounter took place in 1990, and failed to mention on Monday that Cosby had given her $400.
Cosby grinned and tapped his cane at the defense table as McMonagle confronted her with the discrepancies. Johnson struggled to explain them.

She first raised the accusations in 2015, when she spoke out at a news conference organized by celebrity lawyer Gloria Allred.

“I felt embarrassed (at the time) because I had a secret about the biggest celebrity in the world at the time and it was just me, just my word against his, and I was very afraid,” Johnson said Monday, explaining the delay.

Her mother and a lawyer involved in her related worker’s compensation case against William Morris could be the first witnesses Tuesday if the judge permits their testimony.

Constand, 44, of the Toronto area, is expected to take the stand this week and tell her story in public for the first time.

McMonagle also has attacked inconsistencies in her story, pointing out that she initially told police she never spoke with Cosby after the alleged assault. But phone records, he said, show the two talked 72 times that year, with 53 of those calls initiated by Constand.

He told jurors their relationship was romantic. Constand’s lawyer has disputed that since Constand was dating a woman at the time.

Regardless, Feden said Constand could not have consented that night given her condition.

Cosby, his good-guy reputation already in ruins, could get 10 years in prison if convicted of aggravated indecent assault.

The AP does not typically identify people who say they are sexual assault victims unless they grant permission, which Constand and Johnson have done.